You are here: Home / Testimonials / “I have been raving to everyone about Hypnobirthing” 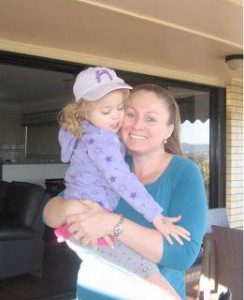 As you know from my excited text message, our precious Sophia  was born on Friday, 8 July after a great 7.5 hour Hypnobirth.

I awoke at 4.35am on the Friday morning, 41 weeks pregnant and cursing the back ache that I thought had resulted from the acupuncture that I had had the previous day (in an effort to avoid being induced on the following Tuesday).  I prayed that the ache may in fact be the start of labour and 10 minutes later, surges commenced and confirmed that was the case.  I was over the moon, but decided not to wake my husband, Bern, and instead went back to bed to start implementing what I had learnt in your fantastic Hypnobirthing classes.  As with the birth of our first daughter, Isabella, there was no easing in with my surges and they were immediately 4 minutes apart.  As I lay in bed, I focused on envisioning the blue satin ribbons, breathing through the surges and using glove relaxation. For some reason I had been fascinated with glove relaxation during the course and afterwards and I couldn’t believe how well it worked. I also played the Rainbow Relaxation CD and was surprised to hear some “new” material on it, because I’d never stayed awake for the whole thing before!

Bern was shocked when he woke up and I told him I had been in labour for a couple of hours.  Thanks to the Hypnobirthing breathing techniques, I easily managed to go about our usual morning routine, just stopping to breathe through the surges as they arrived.  I must admit that, when Bern decided to take a 20 minute shower, I wondered if I should be giving a little bit more of an indication that I was really in labour!!

At 8am I rang the hospital just to let them know that I was in what I thought was the “early stages of labour”.  My surges were about 3 minutes apart at this stage, but still only lasting for around 30 seconds.  The midwife encouraged me to go into the hospital sooner rather than later, given that it was my second baby but  I “negotiated” that I would stay at home for another hour or so before heading in.  Anyway, at around 9am we decided to take some family photos and then head to the hospital.  Attached is a photo taken after 4 hours of my 7.5 hour labour. – As you can see, I was still managing just fine using only the breathing techniques at that stage.

On the way to the hospital I listened to the Rainbow Mist Track and continued to focus on breathing through the surges.  The midwife in the pregnancy assessment unit asked about my surges and then queried who had told me to go to hospital.  When I told her the midwife’s name, all she could say was “Oh, you poor thing” as though I had been misled.  I was a little perplexed by that, but even more so when, after monitoring my surges for 20 minutes and seeing how regular they were, she indicated that I should consider having a stretch and sweep so that I would “have the baby this weekend, rather than having to come back for an induction on Tuesday”.  I couldn’t believe what I was hearing!! – I knew that Sophia would be with us within hours, not days.  I just continued listening to Rainbow Mist and breathing, with Bern doing a fantastic job with light touch massage. When the midwife did an internal exam 30 minutes after we arrived at the hospital, the look on her face was priceless and she exclaimed “Oh my goodness. – You are amazing!”.  I asked why and she asked me to guess how far dilated I was.  I guessed (or did I intuitively know?!) that I was 5 centimetres.  She confirmed that I was 5-6 centimetres and sheepishly told me that she had just told my obstetrician that she did not think I was in labour at all!!

After my obstetrician was given the “news”, he offered to rupture my membranes.  Thanks to the knowledge I gained through your Hypnobirthing course, I was adamant that I didn’t want that and Bern also spoke up in that regard.  The midwife told me that my obstetrician was due to go “off duty” at midday and that his colleague would be delivering our baby if I went past midday.  I just knew that Sophia would make her arrival by then, so I told the midwife to let my obstetrician know that he would be delivering her!

All I can say is thank goodness I refused the membrane rupture, as there was meconium in the waters when they finally ruptured 25 minutes before Sophia arrived.  I shudder to think how different my birthing experience would have been if my waters were ruptured and the meconium detected earlier.

For the remainder of labour, the only Hypnobirthing tools we used were breathing, light touch massage and listening to the hypnobirthing tracks.  Bern was a fantastic support and the light touch massage really worked for me. I had really hoped to labour in water and the midwife ran the bath for me, but as with my first labour, I could not face the thought of being in water when the time came to get into the bath.  So instead, I knelt on the bed with my arms over the head of the bed as I had seen on several Hypnobirthing videos and that position was great for me.

One of the most amazing aspects of my birthing experience was when Sophia started moving down the birth canal…. Before I was even aware of that happening, my breathing automatically changed from surge breathing to birth breathing!  Despite the faith that I already had in the ability of my body and my baby to work together (thanks to you!), I was absolutely blown away by the fact that my body just knew when and how to get me to start the birth breathing.

The pressure I experienced during the birthing phase was extremely intense – moreso than during my first labour ” which I think in part was due to the fact that my membranes were still intact, giving Sophia a very gentle journey.  However, never at any stage of labour did I feel like asking for any form of pain relief.  Understanding exactly what was happening with my baby and my body at every stage, thanks to your course, made a huge difference.

When my waters broke and I saw the meconium, I had a slight moment of fear, but everything I had learnt in Hypnobirthing helped me just to go with the flow.  I also instinctively knew that Sophia was not at risk from the meconium and the monitoring the midwives did with dopplers confirmed that she was not at all distressed.

After “holding on” at the request of the midwives for about 15 minutes to wait for my obstetrician to get to the birthing suite, our darling Sophia Rose arrived in the world.  There were no tears or stitches and I felt absolutely fantastic. The paediatrician confirmed that Sophia had not inhaled any meconium (a sign that the meconium was not the result of stress, but rather just the maturity of her bowels at 41 weeks).  She was born extremely alert and nothing has changed in that regard.  She is a lovely, happy little baby and we are just so thrilled that Hypnobirthing empowered us to bring her into the world in such a calm and gentle way.

The midwife in the labour suite told me repeatedly throughout my labour that I was doing an amazing job.  She kept commenting that she felt privileged to witness such a beautiful birth and she even asked for your details so that she can find out more about Hypnobirthing!  It turns out that during my labour she had been telling the other midwives how amazing our experience was.  On our way from the
labour suite to the ward, one of the other midwives commented on how great I looked and our midwife’s response was “This is the Hypnobirthing mum I was telling you about, of course!”.

I have been raving to everyone about Hypnobirthing and I can’t imagine that I will ever stop doing so.  I just wish I could spread the word more quickly and widely!  If only someone else had told me about Hypnobirthing before Isabella was born.  ” Although both labours were drug-free I still can’t get over the difference in my state of mind and level of calm this time around.

Attached is a photo taken this week of our precious Sophia at 4 months.  – She is still as happy and chilled out as ever. J

Thank you so much Melissa! 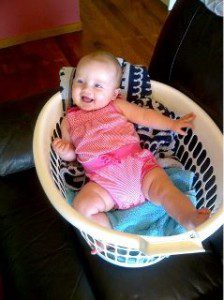