You are here: Home / Testimonials / All I can say is a very very big thank you for your course!
I’d like to introduce you to Minerva, the light of our life, born 4th May.
Her journey was overall a calm one, all the hard work of preparing paid off big time! I didn’t even realise I was actually in labour for the first 7 hours, just 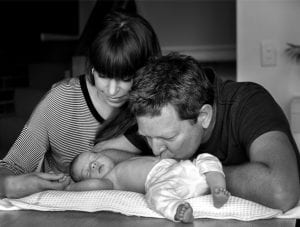 thought it might be Braxton Hicks.. I went to the shops, had brunch with a friend, and even once confirmed I was in early labour I still went to my pre-booked pre-labour massage, where my waters broke on the table hahaha. Midwives
were very impressed by how I breathed my way to dilation and your affirmations were on loop in the birth centre room – don’t think Simon will ever be able to hear them again hehe!
The journey did take a turn away from our birth plan due to my pushing phase being very long (four hours plus, I believe), and I did accept syntocinon to increase the oomph of my surges, and eventually an episiotomy and vacuum were used, but I took no pain relief, felt every sensation and pushed like a trooper right to the end.
After 20hours from the first surge felt to my pulling Min out, it was a euphoric moment, skin to skin and first breastfeed phenomenal and such a rush of emotion. Unfortunately, I had to be taken away for surgery (again I took minimal drugs so as to not interfere with my emotional state or my breast milk) but Simon was there to do skin to skin in my absence. Frustratingly we were in hospital five nights due to Minnie being admitted to Special Care Nursery for having fluid on her lungs and then a risk of jaundice, but Simon and I did all we could to be there by her side 24/7 before she was able to be with me in the maternity ward. 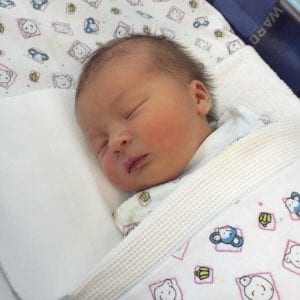 Since then Minerva has been a dream, and her first seven weeks have been none of the nightmare I so often hear about from mums. Yes, there is limited sleep, but I’m coping miles better with it then I could ever have expected! We’ve gone to mums n buns cinema showings, out for meals, galleries and even a trip to stay with friends down south and Minnie has taken it all in her stride. Her smiles and playful moments are on the increase and are simply heart-melting.
All I can say is a very very big thank you for your course, support, and tools. I couldn’t have done it in such a positive empowered manner without them all.
Warmest wishes,
Olga, Simon and Minerva