Just writing to say thank you for the positive birthing skills you taught my husband, Barrie and I last November. 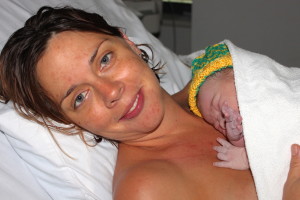 We gave birth to a beautiful baby girl, Margaret (Maggie) Robyn on the 26/01/2015 (Australia Day) in a calm, relax environment at the Mater Hospital.

The birth was not exactly according to the my birth preferences but all decisions made, were my decisions and Barrie and I could not speak highly enough of the whole experience.

The labour all started with a bang at 3am after a few days of early labour niggles and a 3 1/2 hours walk around Southbank on the hottest day of the year at 40+5 weeks.. eek.

The surges were two and half minutes apart and lasting 50 plus seconds from the get go. I went into hospital at 4am to come home again shortly after. With the positive affirmations playing I continued at home until 8am when my waters broke with a big vomit while in the shower and everything intensified.

I was checked by the Obstetrician and was unfortunately told I was 4cm. I then requested an epidural as I could not imagine lasting another 6-8 hours!

Fortunately, I did have my preferences which Barrie and the Doctor knew I was passionate about and once in the labour ward and in the water birth pool with the positive affirmations on, I didn’t open my eyes or talked for the next six hours (Just mooed like a cow according to Barrie.. ha ha). Everyone was wonderful and helped create a relaxing environment.

I was completely aware of everything happening but it was like I was witnessing it, not experiencing it. I am absolutely amazed, as I was demanding pain relief quite forcefully minutes before!!

With a big vomit, huge adrenaline rush and some choice words, I transitioned at 2pm and felt like it was game on. I tried the bearing down techniques, but after almost an hour of this, the midwife, very mindfully explained that other ways needed to be tried.

It was so non-stop from the beginning, with multiple vomits and little time to eat or drink, so by the end I was starting to wear out and my surges lengthen. Maggie was calm the whole time but it was suggested that my bladder needed to be emptied and to see where her head was lying. I could feel her head but there was something stopping her, so was happy with this.

The plan was to get back into the water and was encouraged by everyone but I requested that I get some assistance to get Maggie out. So with that she was ventoused out with two contractions. It was done so well I didn’t receive any tears.

The best feeling in the world was when she was placed on my chest. Maggie was born at 4pm so calm and wide eyed. She had delayed cord cutting and started breastfeeding like a dream within minutes. She has been a calm and a very observant baby since. We just love her!! I have recovered very well.

Barrie is your number one supporter and is spreading the hypnobirthing word to anyone that will listen.

I will definitely be attending hypnobirthing for the next bub.

Thank you for sharing the positive birthing message.