You are here: Home / Testimonials / “I was always mentally and emotionally calm, despite what my body was physically experiencing.” Hypnomum Michele 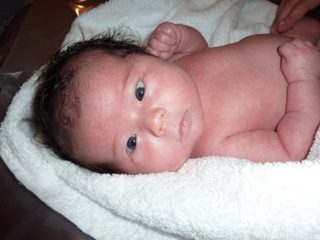 Firstly I just wanted to say thank you so much! I have no idea how I would have coped without discovering your Hypnobirthing course, considering that I had literally vowed never to have children because I was so incredibly terrified of child birth. In fact I had to live in complete denial on a daily basis that I was even pregnant until I had attended the first lesson!

A little about the birth…

Just after midnight on Friday night I started experiencing surges ” it was no surprise to me as I had cancelled a lunch date on Friday after seeing a slight show and opted to get some extra rest instead, as I figured I would most probably need it). I admit I definitely wasn’t a ‘model Hypnobirthing student’ but I had been listening to the affirmations and rainbow relaxation nightly for a few weeks, so I kept these both on repeat as I found it very soothing and reassuring as I breathed through the surges. They were only light so it was certainly manageable, but not something I could sleep through.

I decided to try and keep track and write down the time of the surges, which started at about 15 minutes apart. By 4am they were around 7 minutes apart so my best friend and birthing companion (Lolli) was called over. However the surges had become quite erratic, ranging anywhere between 5 and 15 minutes. Around mid-morning I called the hospital and told the midwife that I was in labour and asked when I should think about coming in. She explained that if I was really in labour I wouldn’t be able to talk to her, however I should think about coming in when I am having at least 2 to 3 contractions within 10 minutes.

By Saturday afternoon they were still erratic so I sent Lolli home and went back labouring in bed. Around 11pm the surges were as close as 3 minutes so I asked Mum to take me into the hospital. By the time I got to the birthing suite to be examined the surges had gotten further apart again and the midwife explained that I hadn’t even properly engaged yet and was just experiencing ‘pre-labour’ which could go on for days or longer considering I was only in my 38th week. Since the birth I have learned that the erratic surges and difficulty in engaging were indicative of a posterior labour.

So I went back home feeling a little silly, having called in my two best friends to the hospital late at night, and went back to labouring in bed. The surges were increasing in intensity and by early morning I was experiencing burning in my spine with each surge. By 8am Sunday morning the surges were as close as 1 to 2 minutes apart so I headed into the hospital again. Of course, they had gotten further apart again when I arrived and I was feeling foolish all over again, but was struggling to cope with the surges. I had been leaking amniotic fluid for some time (although wasn’t 100% sure so hadn’t mentioned it) but when I went to the toilet I had a proper rupture of membranes. I told this to the midwife who said she would monitor me for a little bit longer but would most likely send me home again. I was a bit nervous at that point because I was really coming undone with the sensations in my spine, which were so strong that I couldn’t even feel the uterine surges at all. I started to make a little bit of a song and dance, hoping that the midwife would realise that I was really in labour and wouldn’t send me home. She got me up on the bed for an examination to find that I was 5cm dialated and then everything started happening all of a sudden ” the surges were coming hard and strong and I couldn’t help but bear down with every ounce of strength I had in me. The midwife explained that the baby was in the wrong position which made me feel like I had to push, however it was important that I didn’t push…. WELL ” that was quite possibly the most ridiculous thing I had ever heard in my life ” there was nothing I could do to not contract every single muscle in my body. I was offered gas but couldn’t really focus enough to suck it in. I became worried that I was harming the baby and so asked if it was too late for an epidural as it was the only possible way I could comply with “don’t push”

The anaesthetist arrived less than 10 minutes later, by which time I could feel her enter the birth canal and the relief was wonderful. When the midwife told him it was too late, as I was 10cm dilated, and told me I could ‘push now’ I certainly didn’t hold back. In 3 quick surges she was out and placed on my chest. Lolli had tried to remind me to relax my jaw during that last minute, bless her, but after having been trying to hold back relieving myself of what felt like a jumbo jet ” I just wanted the baby out. I did however relax my jaw whilst breathing her body down in one surge, but after being so tense physically, I couldn’t avoid the tearing.

There was no time to allow pulsation of the cord to finish before clamping as Madeleine had had it wrapped around her neck and was very blue and needed to go into resusc, but she was just fine as I just knew she would be. When she was returned to me she was very quiet but alert and latched onto the nipple easily. She was born at 11:50am Sunday morning, weighing 3.3kg and 50cm long.

So at the end of the day I felt satisfied that I at least ‘accepted whatever turn my birthing took’ And whilst I could use the breathing techniques for the most part of the labour, but couldn’t follow through all the way during delivery, I was always mentally and emotionally calm, despite what my body was physically experiencing.

On a further note, Lolli (being somewhat skeptical of Hypnobirthing at first) was so amazed at how little noise I made when Madeleine came out. Having had two kids already, she said she would have been screaming like a banshee. She told me how proud she was of me, and that if she could do half as well as I did, in her upcoming birth then she’d be happy. So I am doubly grateful to you Melissa and for Hypnobirthing as it was truly a godsend, not only for me, but now in the knowledge that I can help my best friend prepare for her birth too