You are here: Home / Testimonials / I am so grateful that I had such a positive and powerful experience 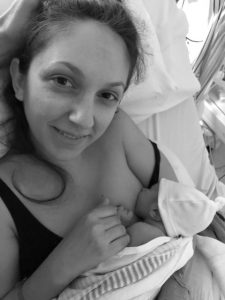 Our beautiful boy was born at 4:48pm on Thursday 4th Feb 2021. For a few days before, I felt unusually tired and my body just wanted to rest, so I spent those days laying on the couch. On Wednesday 3rd Feb, my waters partly ruptured (I didn’t even know that was a thing) around 9pm. I called the hospital and they told me to take my time, but to make my way in. Once I realised that it was all happening, I felt nervous and excited but strangely calm.

My partner and I made our way to the hospital, I was listening to the relaxation tracks on the way, arriving around 10pm. On my first examination, I was 1cm dilated and the remainder of my waters were still intact. We were told to tuck in for the night, and if my waters hadn’t fully opened by the morning, my OB will want to rupture them. Something told me that that wasn’t going to happen.

I put my headphones in and had the relaxation tracks on repeat while I kept myself relaxed with the breathing techniques. A matter of hours later (around 12:30am) my waters fully ruptured, and the surges began. They were gentle at first, and I easily breathed through them as they passed. By about 3am the surges became more intense, and I then needed my partner to help me get through them. We started playing our relaxation music, had dim lighting (including my pink salt lamp), and a diffuser with Clary Sage oil. It was a beautifully relaxing environment, just as I wanted. My partner used the light touch massage to help me through the surges, keeping my body relaxed – this decreased the intensity from a 7 or 8 to 1 or 2 – it was amazing.

I’m not sure how much time had passed, but my next examination I was 5.5cm dilated. I was getting really exhausted as I had missed a whole night sleep but kept on going. About an hour or so later, I was still 5.5cm, so my OB recommended I have Oxytocin to increase the frequency and intensity of the contractions and help me to dilate quicker. The concern was that I would go another night without having birthed our bub, and I knew I did not have the energy to go another night, so I accepted the Oxytocin – I knew it was the right thing for me to do. Once the drip was in, it was a matter of minutes that the surges were way more intense, much less time between them, but they were shorter when they came. I moved from the bed to the fit-ball, while leaning over the side of the bed with pillows stacked up to rest my head and arms. As my adrenalin was increasing, my body started to tremble uncontrollably. This made it really hard to relax my body, so the surges were extremely intense. I felt them through my lower back as my bub was posterior.

I don’t know how much time passed, but I got to a point where I was so emotional and in tears saying ‘this is too much, too intense. How am I going to get through this, how am I going to push out my baby?’. The midwives and my partner were so reassuring that I could do it, I just had to keep going, and that’s exactly what I did. I started to have hot flushes. I heard the midwife say to my partner that I must be transitioning based on what I was saying, and that I was getting hot. My OB came and did another examination (again I have no idea how much time had passed), and I was 8.5-9cm. He said he would come back in an hour to see how I was going, but I knew I didn’t have another hour in me – I was absolutely exhausted. The next two surges were super intense as I had to lay on my back for the exam, so I had two sucks of the gas to get me through those. That was magic! Something must have pushed me over the edge during that examination because after those last surges, my body completely took over and I felt the urge to push, or rather my body started to push for me! This was it. My baby was almost here! I got into a kneeling position on the bed, and started to bear down. Although I had used the Hypnobirthing breathing techniques throughout the labour, by this stage I was so exhausted that I remember how to do the bearing down breathing technique correctly, so I followed the OB’s instruction on how to push. Although I had no energy left, I used every bit of strength I could find to breathe and push, and I could feel my baby moving down. I didn’t feel any pain at all, it was just hard to find the strength, but I knew I had no choice but to keep going. At one point I reached my hand down and felt his little head. Once the baby was crowning, I somehow rolled over onto my back, and two surges later, my little baby was born and was placed on my chest. My partner was in tears, and I was overwhelmed with happiness and exhaustion. We waited before cutting the cord and spent the next 2 hours in the birthing suite having skin to skin contact. I thought I would cry as soon as I saw my baby, but I did not cry until all the midwives and OB had left the room, and it was just me, my partner, and our beautiful baby. It was just beautiful. I kept saying ‘I can’t believe I just did that’. Still to this day, I am in awe of what my body did, and I feel so emotional when I think about it. I am so grateful that I had such a positive and powerful experience, and that my baby was brought into the world as naturally as I could have hoped for. The Hypnobirthing course not only allowed me to have the birth I wanted, but it also helped me to let go of all my fears leading up to the birth and made me feel confident and ready for what was coming. Thank you, thank you, thank you!