You are here: Home / Testimonials / From IVF, miscarriage to the best moment of our life!

It’s taken me 7 months to write my birth story. And not because I had a bad experience. Simply because I’ve been a bit distracted my beautiful baby boy (insert smiling loved up emoji).

My journey to motherhood started in 2014. After Carl and I were married in January, we honeymooned in July-August and decided it would be a good time to start trying for a baby. We never anticipated how hard it would be.

After 18 months of trying we sought some help from a fertility clinic. It was then that we discovered I had endometriosis. Three months after my first surgery in February 2016 I fell pregnant. Carl and I were over the moon to say the least. We told our close friends and family and started planning for our next chapter.

I’d had some very light spotting but wasn’t too concerned. It was apparently normal.

And then, one Friday morning as I was showering I started to lose small clots. I knew something wasn’t right. We made our way to the hospital and a scan confirmed I was not as far along as I’d thought. I should have been 10 weeks pregnant, but the scan only showed a sac no bigger than 5 weeks.

The following week I began to miscarry. It was horrible and traumatic. We had so much love and hope for that baby. And I’ll never forget how that little soul changed my life.

That experience took months to recover from. Mentally it scarred me and I began to doubt my body’s ability to get pregnant. I sought professional advice and treatment from naturopaths, traditional Chinese medicine, kinesiology, womb and fertility massage, as well as embarking on a journey of self-exploration.

It was confronting and awakening.

Fast forward to April 2018 when we discovered we were pregnant again! It was exciting and oh so scary… I wanted to tell everyone and no one. I was optimistic and fearful.

Meditation became really important to help with the fear. And I did it every damn day. Sometimes sitting at my desk at work I would close my eyes and meditate for a few minutes to help calm my anxious mind.

I also did yoga twice a week and loved it. It helped me connect with my baby, body, and be in a group of women supporting one another in their journey to motherhood.

With all this in mind, looking at how I wanted my birth I knew I wanted it to be calm and drug-free. I had watched my sister have a home birth and it was so beautiful. I put the feelers out in a Facebook group looking for more information about hypnobirthing. And that’s how I found the fabulous Nikki.

Carl loved Nikki and the Hypnobirthing Australia program. He’s a no-nonsense man and it was all so logical. After the first session, he walked out, turned to me and said: “that was brilliant”. Which is exactly how he was on Christmas Eve 2018 when I was in labour. Brilliant.

Labour started in the early hours of the morning around 6 am. I had some cramping and then what felt like I had peed my pants. So I went to the loo… again… and saw pinkish watery discharge on the toilet paper. Carl and I were arguing about the colour and the smell. What did Nikki say it would smell like once my waters had broken?? Oh that’s right… sex! It smelt like sex!

Not long after I lost my mucus plug and we knew this was no dress rehearsal.

Carl diligently monitored my surges. By 10 am they were getting closer and closer so we made the decision to go to the hospital. I played my Hypnobirthing Australia tracks and I was in the zone.

Until we got to the hospital and my midwife was not there. It was her rostered day off. So the midwife I had for the day didn’t know me and didn’t know my birth preferences. I tried to use the bubble of comfort when she did an internal but it was so horrible I just couldn’t focus. She said I was only 4cm so she’d given me a little stretch and sweep at the same time. Not what I wanted or asked for but I didn’t get a chance to say anything.

We were then given the choice to stay or go home. So I opted to stay.

We were taken up to the birthing suite and this is where we set up for the next 8 hours. The curtains were drawn, lights were dimmed, salt lamp lit, and my hypnobirthing tracks put to play.

Yoga taught me different positions and I think I used them all! Standing. Squatting. All fours. Bending over. Laying on my side. Actually laying was not great but I needed the rest.

While the midwife filled the bath I got in the shower and enjoyed the water rushing over my back. The surges were getting more intense and there was a pressure in my bum that I just didn’t know how to deal with. I got into the water and the surges kept coming but they didn’t progress. So I, unfortunately, didn’t get my water birth but during that time, I rested and felt calm from the water.

My student midwife suggested I sit on the toilet to see if perhaps my bladder were full. So I took her advice. It was here that I felt my baby moving down the birth path. My groans were getting louder and deeper. 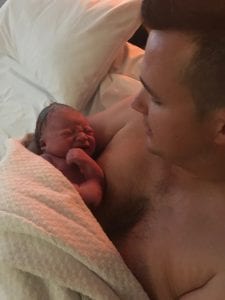 We moved to the birthing stool where Carl sat behind me and I leaned into him. The surges were getting more intense. I could feel burning so I instinctively put my hand down and I could feel my baby’s head. I told the student midwife I could feel the head and she told me I was still a long way off. But once she saw I was crowning she ran out of the room to get the midwife! They were shocked at how quickly it was that I had started to crown after moving to the birthing stool!

I continued to follow my surges and breathed through each one until my beautiful baby boy was in my arms. With Carl right behind me rocked our baby boy together and held each other tightly. It was the best moment of my life. I just remember feeling total elation and relief. He was here. My baby was here in my arms.

He was a healthy 4.09 kilograms, 53cm tall and head circumference of 38cm. And I birthed him naturally!

The first few weeks were rough. I had prepared myself mentally for the birth but those first weeks of motherhood were so much harder. Establishing breastfeeding was really hard. I had mastitis in the first week and then I haemorrhaged from a retained placenta at 3 weeks postpartum.

But here we are at 7 months postpartum and Luka is a happy, healthy, joyful baby and we are still exclusively breastfeeding.