You are here: Home / Testimonials / I had one of the most empowering and truly amazing experiences of my life!
Madelyn Edith’s birth story
I undertook Nikki’s Connected Hypnobirthing course in July. As third time parents my husband Dale and I were amazed by how much we learnt and how we could reframe our previous birth experiences. After the course I downloaded the Hypnobirthing tracks and began to listen to them each night. At first it felt slightly strange but soon I was becoming so relaxed that I would only hear the first few minutes and then would fall into a lovely deep sleep. I believe the tracks really helped me to have the most restful sleep towards the end of my pregnancy as with my other two pregnancies I had experienced many wakeful nights!
My guess date came and went and I felt extremely ready to meet our baby girl. My Midwifery Group Practice midwife Jacinta came on the Sunday and did a stretch and sweep and I was 3cm dilated. I felt sure I would wake up that night as I had with my other two pregnancies and be in labour. But this little miss had other ideas and on Monday Jacinta came again for another S&S and I was now 4cm. I began getting some irregular mild surges a few hours after the S&S and told hubby he should come home from work as it was likely we had a baby on the way. I had my older two children home from school so went about the normal nightly routine stopping to breathe, sway and relax through the surges. After the kids were in bed I felt extremely tired so lay on the couch and fell asleep.
When I woke a few hours later the surges had completely stopped. Again I felt sure that I would go to bed that night and wake up in active labour. I woke the next morning with absolutely no signs of labour. Nikki had offered to come over and do a fear release so I decided it was time to take her up on that offer. I also got hubby to download the baby come out track. I listened to that on my fit ball and found that I began to cry when listening to it. I really resonated with the section that asks baby what does she need to feel ready to enter the world as I felt extremely ready.
Later in the afternoon Nikki came over and we did a fear release and spoke about what may be holding my labour back from progressing. The next day at 40+5 with no signs of labour I went and finished shopping for my daughters birthday present and ended up at the Royal Adelaide Show! Again I went to bed that night thinking that surely she will come now that everything was in order and I was exhausted. Again I woke in the morning with no signs of labour. Hubby took the older two children to school and then headed out for a surf. At 10:30am I lay in bed and listened to the baby come out track again. Towards the end of the track I felt an unusual clicking sensation. I went to the bathroom and had a show. I then got on the fit ball, drank my raspberry leaf tea and rolled clary sage on my ankles. At 12:30 I began  getting regular surges. I listened to the Affirmations and Surge of the Sea tracks and read the Lotus script. I tried to lay down and rest but the surges were too intense so spent most of my time on the fit ball with a wheat bag on my lower tummy and back. I used my breathing techniques and visualising a wave during each surge and found this made things very manageable. I also had the affirmations ‘Each surge brings my baby closer to me’ and ‘I am focused on my calm, gentle birth’ on my wall. I also focussed on ‘I am prepared to calmly meet whatever turn my birthing takes’ as I know birth can be unpredictable at times and wanted to be ready for the journey ahead. I also messaged Nikki and my student midwife to give them an update.
At about 2:30pm I had a strong surge and then a mild one two minutes after the first. Dale told me that we should go to the hospital. I said that my waters hadn’t broken yet so I didn’t think we should go. He grabbed our bags and told me to get in the car and by 3:00pm we were on our way. I messaged my student midwife and Nikki and rang MGP who told me that it was Jacinta’s day off but that she had requested to be contacted and that they would call me back to let me know. They asked what I was doing and I said that I was already on the way to the hospital! 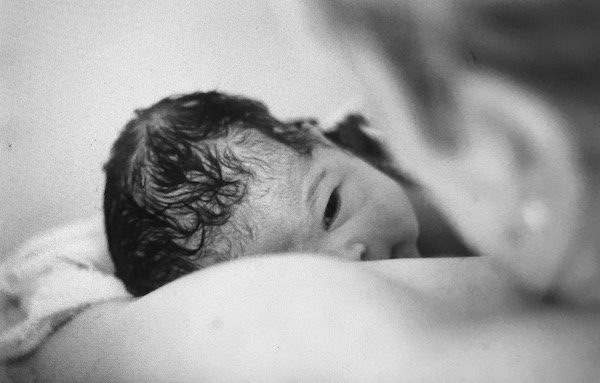 When we got to the Women’s Assessment Service it was full of people and bright lights. This was probably the hardest time to stay focussed but I was able to labour using my bubble of comfort and breathing techniques/visualisations through each surge. The lady sitting across from me told me that I was doing an amazing job and that she would have been screaming by now! The surges were quite intense by this stage and I was willing my midwife to be there soon or for somebody to get me a room so that I could labour the way I wanted. A few surges later my student midwife  came through the door and I was so relieved to see a familiar face. She took one look at me and asked if I would like her to go straight back up to the birthing room to fill the bath which I quickly agreed to. A few more surges and I looked up and saw Nikki and my midwife Jacinta and was so relieved that they were there. They took me up to the birthing suite and I felt so safe in the birthing space and knew now I could have my baby. Nikki asked if I would like any tracks on, I told her I generally listen to them through headphones so she asked if I would just like the background track on which I did. It is amazing just how triggering this was as it brought all of my practice straight back and I was able to focus on my breathing techniques.
Everyone left the room except Dale and I used him to labour through the surges which were now on top of one another.
A few minutes later I told Jacinta I needed to go to the bathroom and as I did my waters broke and straight away I had the urge to bear down. My birthing team helped me into the bath and I began bearing down using my breaths. In my previous two labours I had been independent and didn’t want anyone touching me. This time I wasn’t letting hubby go and used him for an anchoring touch! Nikki and Dale kept me focussed using prompts and I surprised myself by how calm I was able to remain during this stage as in my previous labours I had lost control by this point saying that I couldn’t do it.  But this time I knew both my body and my baby could do exactly what they needed to do.
As baby was entering the world I was able to hold her head between surges by using the lotus visualisation which I had only really read over properly that morning. Madelyn was born into the water at 4:48pm about 20 minutes after my waters releasing and I was able to lift her out of the water and onto my chest. We stayed in the bath enjoying those amazing first snuggles and then slowly got out choosing to delay cord clamping and deliver the placenta naturally. A few stitches were needed but I was able to snuggle and feed my baby girl who latched like a champ!
I cannot speak more highly of Nikki and her support – she was professional, grounding, positive and reassuring.
I am thankful for hubby’s intuition and recognising just how far along into the birth process that I was, I am thankful that my midwife Jacinta came in on her day off to be part of my birthing team and most of all I am thankful for one of the most empowering and truly amazing experiences of my life birthing my beautiful daughter Madelyn Edith.
Rochelle