You are here: Home / Testimonials / VBAC Accidental Home Birth “The Day That I Was Born Into Being A Fierce Mother”

Although it took us 6 months to conceive Manaia, once we had made the decision to ‘sort of start trying’…it happened first go with our little man. Again I had an amazing pregnancy, and given that we were wanting a vbac, I was determined to do things a little differently this time and convinced Rana we needed a private midwife and to move hospitals. These two decisions were the foundation for our success.

With our first lot of bloods the results came back saying that we were high risk of a chromosomal abnormality such as downs. I thought something must be wrong. There’s no history, I felt in my bones that it wasn’t right. We did the more thorough blood test which confirms everything was fine, and we had a boy! BUT I had low PAPP-A levels and likely would result in a low birth weight baby. Hmmmm interesting knowing with Manaia we were told she would be big, and also given the size of Rana it was difficult to believe. None the less it concerned us.

So we were booked for more scans, and then were told as a result of them that we would have a large baby and would need to be monitored. I could start to see the cascade of intervention occurring and with the support of our private midwife (Mae’t Pearson) declined further monitoring and appointments via the hospital. 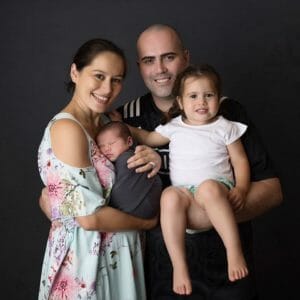 The remainder of the pregnancy was relaxed and beautiful as it should be. Mae’t visited at my house for each appointment and I didn’t have to wait at a hospital for hours each time, or worry about sleep times for Manaia. This made a major difference to my stress levels and inner calm 🙂

So at the pointy end of everything, I began having contractions that required me to stop and breathe through, but nothing would eventuate. I had entered into 3 days of prodromal labour. It was such a mental challenge every night, laying awake alone. And it’s amazing how you focus on trying to get on with it, rather than just relaxing and putting calming music or meditation in your ears!

On the third day, Mae’t said she’d come for a visit, to check in mentally and to go through some tips and tricks. She said she’d be here at 7:30pm and to try getting on all fours as often as possible to allow him room to reposition if required. He had been head down and engaged from an early stage, but she suspected his chin wasn’t on his chest…

So I was on all fours a lot, and I think  by that point I started to surrender to the experience. I never really understood what it meant to do this, but I just let go of making it happen, and got on with life. I sewed between contractions!

In the afternoon I went down to the pool while rana went and collected Manaia from my dad’s (she’d been there for 3 days). When she saw me, she yelled out mummy and was so excited I think I physically felt the rush of endorphins throughout my body! We had a lovely time swimming and laughing 🙂

After putting Manaia to bed, Mae’t arrived early (yep, a midwife early!) at 7:10pm! At 7:15pm I had my first contraction since she arrived and she came over to squeeze my hips and ease the pressure. My waters broke spectacularly all over the kitchen floor! I actually started laughing and would have jumped for joy if not for the watery mess at my feet! My body was working! It was doing something!!

And then. Oh. My. God. The contractions came thick and fast. It was on like Donkey Kong! I moved to clean myself up and made it to the doorframe of our bedroom before being stopped by 3 contractions in a row which didn’t give me the chance to catch my breath. I remember thinking “if this is what it’s going to be like for the next 10 hours, I’m screwed!”. I couldn’t sit on the toilet from the pressure down there and opted for the shower. Rana ran up to the shops to grab some labour snack foods I had requested (grapes, mangoes and coconut water). By the time he came back I was well into my mooing phase lol. Oh god I was loud! Rana said I was at 120% when he walked in, and then suddenly I levelled up to 200%! He tried telling me to quieten/calm down bless him haha there was no controlling that! 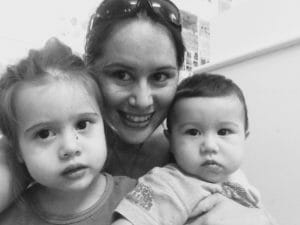 He tried getting in to the shower with me and lightly touching my back, but my arm involuntarily flung him away. Neither of us expect that! Makes sense on reflection though – I needed firm pressure at that point. There was no room for him anyway so he stepped back while Mae’t remained at the entry to the shower.

I can remember physically feeling each phase and also being aware of my changing mental state with each phase.

Ambulance officers arrived at some point and started asking me questions… I ignored him, knowing Rana would handle everything. He asked me if I wanted pain relief, which I refused. He checked again, as if in disbelief. They came ready to transfer me, but I said very strongly “I’m not going anywhere!”. Mae’t confirmed this and he was like “oh, is she crowning?!”. Mae’t said not yet, but had me check. I felt and could feel my baby’s head and hair. He was about an inch away from crowing. I became excited and it encouraged me to continue.

When I felt his head drop into the birth canal, the contractions changed soon after to bearing down, not just the tightening around my waist. Mae’t picked it up straight away and reminded me not to push – just breathe.

Everything went quiet. I rocked slightly to ease him down. Mae’t had me do a few pelvic tilts which spurred him on again and then there was the burn. Oh god the burn! But you know, the burning wasn’t as intense for me as the contractions were. Probably because of my breathing. Then, before we knew it, he was in my arms. In our ensuite shower. No drugs. No pretty music. No affirmations. A couple of excited ambulance officers and my stepmother. Wait what? I didn’t even notice she’d come in, though I have a vague memory of acknowledging her when she came in lol. Oh yeah, and just a short 2 hours exactly after my waters had broken…

Ari needed some oxygen to take his first breath, but remained on me and attached the whole time. 20 minutes after his birth, my placenta came naturally without me even remembering about that part! That felt rather weird.

I had to crawl to the bed, having lost a bit of blood and feeling very weak. I also went into shock. Ari remained attached to the placenta for 1.5 hours before rana offered for me to cut the cord, as he had cut Manaia’s, and it’s not something a mother gets to do that often.

3 hours later and everyone had left and we were tucked up in bed with our new baby, all the while Manaia slept peacefully in the next room!

Our little man was born on our 5th anniversary of getting together. He was also born on the year anniversary of my uncle’s passing. My stepmother was there when my uncle took his last breath, and she was there when my boy took his first. It was such an emotional day for so many of our family members and for so many reasons. It will be a day of mixed emotions for a long time, but mostly for me a day that I was born into being a fierce mother – a mother who owned her power and used it to bring her boy into the world.

I was admitted to hospital after a few days for high BP as I was with Manaia, but not as high and I remained unmedicated this time.

And although post birth I felt like my bits were so heavy they were going to fall out, it was oh so very worth it!! Oh and they probably felt like that because his skull was completely intact, meaning i birthed the full girth of his 37cm head!! I only had a slight 2nd degree tear (no stitches) and a few grazes.

Rana and I have Hypnobirthing to thank for continuing our journey in self-belief and self-empowerment. For having us know it’s a matter of finding our support team and searching until we get it. I didn’t rest until I had the right person – I came close, but Mae’t was my gal!

Hypnobirthing for us wasn’t about using the skills we were taught – although in a perfect world, we would have. In a perfect world babies would all be born a certain way too, but they choose their own path. Hypnobirthing for us was accepting that oath they choose and going with the flow. Planning for a perfect birth, and surrendering to the process. Much love to you for teaching us that. For educating people – I thoroughly believe this should replace the hospital antenatal education, which is severely lacking in any sort of helpful information and insight.

Thank you for being passionate and sharing your passion with the rest of us!

You can find your closest Hypnobirthing Australia class here.

You can book into the hypnobubs hypnobirthing online course here.