I wanted to share our birth story with you and thank you for our hypnobirthing experience! After attending your course earlier in the year, both Matt & I were feeling very positive about the upcoming birth of our first child. Understanding the birth process made it easy for us both to believe that a natural birth was not only possible, but the way it should be.

At 38 weeks pregnant I started losing my mucus plug. That day, I had an acupuncture appointment (which I had throughout the pregnancy) and my acupuncturist actually said to me…”Its nice day to have a baby!”. Matt and I then had lunch at West End and had a routine OB appointment. My OB commented that baby’s head was “half way to my knees!”. In hindsight I was nesting that day, as I also did a half day of work, cleaned the bathroom, made Matt vacuum, prepaid months of bills and cooked Cottage Pie for dinner!!… at 8.30pm I decided to put some towels down in bed “just in case”. I then went to the toilet where my waters broke with a loud pop! About 10 mins later I had my first contraction.

On calling the hospital, we were told we had to come straight in. Both Matt and I were very disappointed as we were wanting to labour at home. Lucky we did head to the hospital though, as within about an hour or so of my water’s breaking, I was having 3-4 contractions every 10 mins. They put me into the assessment section and the midwife was reluctant to believe I was progressing so quickly. In her words “first time mums don’t progress quickly” and she was arranging a waiting room for me to go to until I was ready to head to the birthing suite. I blocked this out and continued with my breathing and Matt was right next to me, reminding me to breath and holding me the whole time. Soon, I needed to visit the toilet where I was vey ill. At the point, Matt told the midwife that we needed to head to the birthing suite and not this other waiting room. The midwife asked if she could check my cervix (as I had refused when we first arrived). I decided I would let her – as I knew I was progressing very quickly and needed her to know that! I was 5cm and she very quickly arranged the birthing room (after saying “Oh, you are progressing quickly”). I slowly walked to the birthing suite- stoping to breath through the contractions as I had them.

Our new midwife in the birthing room was wonderful. At first she advised she needed to also answer the phones from our room as they were short-staffed but when we advised we were hypnobirthing, she got rid of the phone, put a sign on the door, dimmed lights and offered music. She sat back for most of the labour and only engaged when necessary – she also directed her questions to Matt, was very positive in what she said and spoke in a whisper. I remember hearing her say we would have to have 4 or 5 kids as I was built to labour! I kept my eyes shut for almost the whole labour and it was soon time to get the baby out! After about 40 mins of trying my OB arrived and suggested a new position. He also suggested a mirror, which was excellent as it made it easier for me to put my focus into the right part of my body. About 20 mins after my OB had arrived – baby was crowning. My OB did an amazing job in easing the head out and calmly directing me at this point – and the result was NO tearing at all! The contraction after the head appeared delivered the baby and what a feeling that was! Baby Samuel was born at 2.07am – after a very intense but very short 5.5 hour labour. 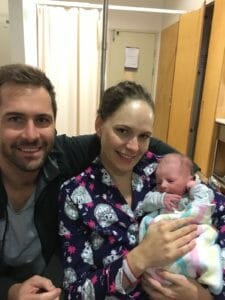 The cord was very very short and therefore we couldn’t do both delayed cord clamping and have the baby straight on my chest. After about 30 seconds we decided to cut the cord so I could get the baby up to me and my OB then manually delivered my placenta. After about 20 mins they needed to give our baby some oxygen but they brought him back to me after about 15 mins and we soon tried breastfeeding. The baby knew exactly what he was doing, latched perfectly and fed for an hour. After feeding, Matt had skin to skin while I showered.

Matt was an unbelievable support and I could not have done it without him. It truly was a team effort. In the end, I didn’t want music, shower or any other tools other than having my eyes closed, the breathing and Matt’s touch (he worked acupressure points on my lower back – thankfully as I was having serious back labour for some reason). I was not afraid at any point. There were a couple of points that I felt couldn’t go on, mainly due to exhaustion, but I stayed as positive as I could at these times (with Matt’s supportive words and reminding why things were happening as they happened) and we did it. The hypno preparation we put in really paid off.

Almost every hospital staff member that entered our room over the next few days commented on how relaxed we were, how perfect Sam was and more than once we were referred to as the “calm room”. Sam has breastfed perfectly since day one and I have had no problems. He also put on 1kg in the first four weeks! He LOVES to eat. My recovery was also so quick. I did not require any pain relief in the recovery either.

Thank you Melissa, your course assisted us greatly in achieving the birth that was so important to us. The messages of the course are actually so simple – trust your body, trust yourself, approach it as a team and don’t be afraid of what nature intended. I hope more people take your course and believe this, so they can achieve what we did. Since the birth I have felt very proud of what we achieved and it has given me a lot of confidence. I have no doubt that my acupuncture and prenatal yoga also played a big part in the way the labour progressed. The drug free birth was the hardest thing I have ever done but I can not imagine doing it any other way. Thank you again for being a part of making it happen!