You are here: Home / Testimonials / Where do you start with a birth story! So many places!
My positive birth story.
Where do you start with a birth story! So many places.
A run down on my pregnancy and birth experience would be an overall healthy and positive one, I took a class for hypnobirthing with my partner from around 26 weeks and we both loved every minute of it learning about the birthing body’s natural innate wisdom to just do what it is designed to do.
I was 41 weeks exactly and had a routine hospital visit scheduled to see a doctor and to have another CTG done due to low amniotic fluid. A formal scan was also ordered to check babies movement and flows etc. I was booked in to see the doctor early in the morning to which he suggested induction in two days which I politely declined until I had all my monitoring done and if all was well I would be on my way. I made my way down stairs after the short visit to get the CTG in which baby’s heart rate was high. I took an IV and it came down. My beautiful midwife monitored my Braxton Hicks tightening from the TOCO reading and looked at me very positively. I was there until 3pm due to the baby’s responses from the CTG but was sent home after all being well, to than return for my appointment at 4:30pm for the formal ultrasound.
I went home for the hour had something to eat, took a phone call from an electrical company, changed my gas and electricity over with them. Got myself a drink, relaxed and headed back to the hospital. I was having some more cramps, like menstural feelings, which got a little longer and stronger together. I was in the waiting room standing up as my sciatic was playing up, to which I swayed and moved and tried to release all the sensations I was having. The ultrasound scan was fairly uncomfortable, to have to lay on my back which already hurt was not pleasant. I had been getting blood and little amounts of mucous for two or three days now so after the scan I went back up to go over results with my midwife. I knocked at her door and told her how I felt to which she replied I really think your in labour, with a huge smile on her face.
I was put into room 12 where I was going to meet a doctor to discuss my options regarding the results of the formal scan. It was around 5:30pm when my midwife came in to see how I was and noticed my movements etc. I was swaying lent over the bed and surge breathing. 4 breaths in 8 breaths out. Jade moved me into birth suite 2 (with a lovely view, in which we didn’t see anyway because we closed down all the blinds and had fairy lights going) Doctor Heidi arrived at around 6pm and discussed the results with me saying that I would need to be induced because baby’s movements were scoring a 2/8. Mind you I am fully informed about all my birthing rights and knew me and my baby were ok. She was buried deep into my pelvis, of course she’s not loving as much 😆 but because of low amniotic fluid, also common in late or pending labour, the doctors were worried. I first refused the idea of induction because I thought they were going to do it right than and there, the options were a balloon being inserted to make me more favorable and hopefully go naturally overnight and than if things didn’t progress they would use synthetic oxytocin.
Heidi explained that no she wasn’t going to do anything right now but she needed to Check me to see if I needed the balloon. At this point I was breathing and concentrating threw my surges, I held my finger up for her to give me a minute and stop talking to me because I couldn’t concentrate fully on what she was saying I needed to focus on my breath.
I agreed to be checked and they gave me some time to set up the room. 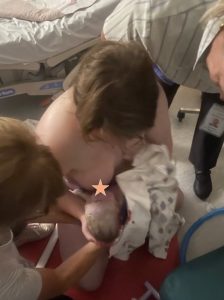 I had my hypnobirthing music going out of my Bluetooth speaker, the room was dim lit with fairy lights and I had the bath running ready for me to get in! I was in my zone.
From there I was out of it, I was fully aware of what was going on but totally in my own state. Heidi has me on the bed (which I must have zoned out of and wasn’t even aware she was there, and threw all my cervical checks (2 or 3) I managed to completely block it out. Apart from my sciatic hurting the whole time which hurt more while on the bed I didn’t experience any discomfort of them checking.
Heidi left and I turned to My partner Kieran who held me over the side of the bed and I asked “are they putting the balloon in” he replied “no your already favorable”
I got off the bed and went into the bathroom to get in the bath, it wasn’t ready so I started in the shower trying to find a completely spot for my sciatic inbetween surges. Nothing was really helping until I got into the bath. I had a breast feeding pillow I leaned over the side of the bath with and Kieran applied warm water from a hose and when surges came I would yell pressure to which he applied an acupuncture pressure point in my lower back. He tried being cheeky by the end of it and used one hand but I needed the pull brunt of his two hands and made him do it properly 😆
To say my lower back was a bit red and sore after it is an understatement, also my knees got a good work out!
The midwives were trying to monitor bub under the water but couldn’t get a good trace because I was so actively moving around (again the doctors weren’t happy) so I was asked to leave the bath for observations.
I refused and didn’t want to but in the end I came back into life breathed some fresh air (by this stage I was on a low dose of gas and air) I than agreed to get out and leant over Kieran while he held me up, the gas and air had to be moved from the bathroom to the main room so Jess the lovely midwife asked me when she could move the cords and I said when I have a surge you can move it. I told Kieran repeatedly threw these weird feeling awakenings to take photos. I felt the transition it was unreal! I looked at Kieran and I said to him just know that even though I doubt you sometimes it’s only my insecurities I know how much you love me and I had a bit of a cry.
I walked over to the other room and instinctively took a kneeling position on the ground. Got my gas and air back and continued to breath threw my surges that I learnt. I checked in with baby at times and knew we were working together to bring (unknown gender) into the world.
The doctors came in again and there was a lot of discussion which I blocked out but got the jist of a few things like the monitoring isn’t working (because I was moving so much) so they wanted to put a monitor on baby’s head, I ended up having the CTG attached(which I was unaware of) and continued to progress.
It was 8:30pm and I was into second stage labour. I continued to use a kneeling approach and at times had my husband hold me up while I put all of my weight on him.
My waters broke and again was asked to be checked to see if baby was okay and if they had to intervene. The pain associated with my sciatic on that bed was sooo bad but also probably a nice distraction! I could feel muscles I’ve never felt before getting a good bloody work out and so the waves were very strong and very regular. I blocked this examination out again and when they were done I had Kieran hold me over the bed with my legs and arms up. Lorraine my beautiful midwife who was to bring this baby into the world noticed another transition and asked if I felt the urge to push. Which I exclaimed YES.
I got on the floor again on all fours and listened to my body and what it needed to do I rocked, I lent, I grunted, I howled, I puffed, I hissed. Than pushing stage really set in as baby descended further and further. She was looking after me and took her time (45 minutes) to slowly descend into this world. I could feel and was aware of every sensation and as the head finally emerged I took a minute to breath and felt her head. I whispered to her “we can’t wait to meet you baby, we’ve been waiting to meet you”
Finally bub was turned inside me and brought out into life threw my legs and I grabbed her up to feel her genitals and looked at Kieran and said “I don’t think I can feel a doodle, I think it’s a girl.”
I brought her up to my chest, fell back onto my ass to rest my bloody legs.. oh sciatic is gone, funny that 😆 she fed straight away and once all was good with me we got a warm blanket laid on the bed and had uninterrupted bonding time with our new United family. Once I had some vegemite toast and strawberry jam toast I wanted a well needed shower and Kieran got to have his skin to skin with our new bub (unnamed until late the next day)
Jasmine  was born 7 pound 6 ounces 46cm at 1:20am 29/01
You can find your closest Hypnobirthing Australia Classes HERE.