So just emailing to say that on Sunday at 37w+2d, I went into labour and approximately 3 hrs later (early Monday morning) we had a baby boy, Knox. Apparently I grow babies pretty quickly and efficiently and then birth them just a easily.

So all day Sunday I was having random surges, very mild (similar to most other days for the past few weeks). Then around Aila’s bath and bed time they started happening more frequently, but still not anything different to the weeks leading up which is why I don’t really count it as part of my labour. Then around 8:30pm it was beginning to become clear that this might be it as they were happening every 3-6 minutes, BUT still very mild.
I sent the midwife a message saying that it might be a false alarm but I thought I would let her know anyway.
About a hour later my surges turned up slightly in intensity and i had the urge to wee every time they came (we had towels everywhere so I could remain standing, which was my preferred position).
Then at 10pm we decided we better head to the hospital as this wasn’t just a practice and after Aila I knew things would progress quickly.
Luckily we did, by the time we got to the hospital (2 minutes away) my surges were now 30 seconds apart and had turned up yet again in intensity (still very manageable with breathing though).
Once we were settled into the birthing suit with your prompts for birthing over the speakers my surges were starting to turn.
(Urges to release were overpowering and I ended up on the toilet for a good 15 minutes – which wasn’t the best position for surges so they started hurting by then.)
My legs then started to ache (as I had been standing since about 8:30 having surges and swaying) and I decided to climb up onto the bed to try and rest my feet and arms and I started to regain control over my breathing again.
Then came the turning point – just like with Aila, and I tried to think about what you had said and not run away from the progression. I couldn’t control my surge breathing any long and just did what felt right, which was bearing down.
I started to feel the baby’s head coming down the birth path and tried to visualise my pelvic floor muscles relaxing.
The midwife was great during this point because although she was trying to guide me in what I was doing she was trying to slow me down, which has made all the difference compared to Aila.

I realised as she was saying to slow down in my bearing down that my body was saying it to – I just didn’t listen last time 🙂
His head came out and my surges stopped for a little bit (felt like a minute or two), which gave me a chance to rest and regroup.

Then the next one came and I managed to slowly urge his shoulders out. Then at 12:07am on Monday morning the 27th of July we welcomed little ‘Knox Jayden’ to the world. Weighing in at 2765g, 46cm long and a 32.5cm head circumference.

What a great birthing experience again and I didn’t tear at all this time and my recovery has been so much better.

Anyway we left the hospital the Monday afternoon at my request to get back to Aila and feeling so good. So we are now at home adjusting to having 2 children to look after and how small he is compared to Aila now. You forget how small they were. Also learning how to deal with male babies compared to female babies (little fire hose) 🙂

Thanks again for all your help and see attached some photos from the hospital, 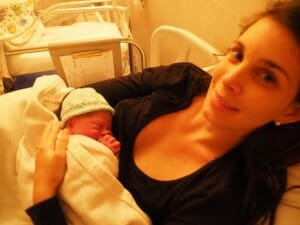