You are here: Home / Testimonials / I want to say a huge thankyou for your course, it was the reason I was able to do 22 hours of labour with just gas and air 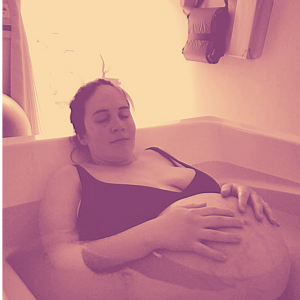 Hi Kasey,
Yes our big beautiful boy Jacob arrived into the world on 6/10/20 after 22 hours of labour.
We were able to labour 14 hours at home using hypnobirthing techniques and did the final 8 in the hospital after I hit the end of my tether and felt more comfortable with the idea of being in hospital rather than home.
We used affirmations, music, a calm environment, minimal intervention in the beginning, labouring pool, fit ball under hot running water, gas and air and sterile water injections for pain relief
Jeremy and I had a signal to identify when I was having a surge so if anyone was asking me a question he was able to tell, it was so good!
I was able to fully relax between surges and one of the midwives even commented on that saying it was amazing how I could relax completely between surges. This was definitely one of the reasons I was able to go for so long without being extremely exhausted.
At hour 21 the Doctor discussed with us an epidural and vacuum then cesarean if that failed, which he said most likely would as it had been a long time now and I had been pushing close to 2 hours with mild progress.
As we knew our rights (thanks to your course) my husband being my advocate was able to ask what the risk was in waiting abit longer as they where continually monitoring baby and Jacob and myself were doing great, so with that the doctor gave us an extra 30 minutes before organising the trip to theatre which was all the extra time I needed !!
In that moment I knew that wasn’t the ending I wanted and Within 20 minutes Jacob started to crown.
And yes he had shoulder dystocia due to his size but the midwives and doctor were absolutely amazing and manoeuvred him out without any major complications.
Jacob weighted in at a whopping 9 pounds 15 Oz of pure perfection And we are absolutely in love with him.
I want to say a huge thankyou for your course, it was the reason I was able to do 22 hours of labour with just gas and air.
We especially found this course to be helpful for my husband, as he felt confident in being my advocate and birth partner.
Love
Tanika, Jeremy and Jacob
Kasey taught our program to this mama through the WA Country Health Service (WACHS).