You are here: Home / Testimonials / I have been recommending Hypnobirthing now to everyone 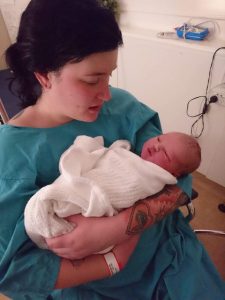 My partner Robbie and I signed up for Vicki Hobb’s hypnobirthing classes in Perth late in my pregnancy, I have diagnosed anxiety and my method of procrastinating and ignoring my worries about labour were no longer working and I needed to do something about it as I was terrified of labour and what was going to happen. I was birthing through the Community Midwifery program and had an amazing midwife Kirsten and was all set to birth at the Family Birth Centre (FBC) at King Edward Memorial hospital (KEMH)

A few ladies at my pregnancy pilates classes had recommended hypnobirthing so I looked into it. Vicki was recommended to me by a friend who knew she was a big advocate for informed birthing so I sent her an email to see whether she still had room in her classes. We signed up and after the first class I felt immensely more informed about birth, i felt more relaxed and almost excited about having my baby. After we finished all the classes (I was 37 weeks pregnant by this point) I felt calm, prepared and REALLY excited for birth and meeting my baby.

At 40 weeks and no signs, my midwife asked me to go and have some monitoring at KEMH. I consented to this and went along. Baby was fine and after declining booking in an induction I headed home. I was quite confronted by the OBs attitude towards me waiting and not wanting an induction and then a midwife whom I had never met offering a stretch and sweep while I was there. At 41+4 my midwife asked me to go back for some more monitoring and I did. This time my midwife met my partner and i there and all was good. An OB completed an ultrasound for me and stated I needed to induced, I replied that I would discuss this with my midwife and let him know what I chose to do. My midwife and I spoke about my wishes (spontaneous labour and delivering at the birth centre). Unfortunately due to policy once you go over 42 weeks you cannot birth at the birth centre. My midwife asked if I would like to try a stretch and sweep because at this point in time it seemed like baby was very comfortable and not likely to come out before 42 weeks. I consented to a stretch and sweep, this was very unpleasant and I am thankful my midwife did this as I told her to stop at one point and she did so. After this she asked if I would like to book in an induction, reminding me that I did not need to show up for this. I said okay – I was booked in for an induction on the saturday when i would be 42+2. As Robbie and I left the hospital, I decided I wouldn’t go in for the induction unless I felt it was medically necessary.

The next day, I went for a big walk around the local shopping centre to try and bring on labour. When I got home, I went to the bathroom as I felt a bit gross and discovered my mucus plug had come out. I let my midwife and partner know but didn’t get excited as after doing hypnobirthing i knew that it may not necessarily mean that labour would start soon. I went to bed and tried to sleep, which was almost impossible because I was enormous.

I woke up at 2am feeling weird, my abdominals were cramping but it was like no other cramping I’ve felt before. I went to the toilet and tried to go back to sleep only to be woken up by the sensation again 10 minutes later. I couldnt lie down, I had to sit up while it passed and breathe through it, which woke Robbie up. This went on for an hour until they were only 2 minutes apart and lasting over a minute. Robbie called my midwife and her know. By this time robbie had helped put my TENS machine on that I had borrowed from a friend. With each surge I breathed through, focusing on my breathing and zoning out from the world around me. We got to the birth centre and my midwife was there, it was now around 4am. My midwife requested to internally examine me which I consented to. I didn’t want to know how dilated I was but she informed me that we may need to head back home. I asked if we could stay because I was feeling the need to push and honestly I dont think I would have made it home. I asked if she could get the pool ready and she did around 6am. Once I got into the water the relief of the surges was immediate, I felt so relaxed once I was in the water. I began bearing down with each surge but couldnt feel my baby moving down any further. After awhile (I honestly dont know how long, time was an illusion) my midwife suggested a different position. I tried squatting in the water and also with one knee up but it wasn’t making a different. I hopped out of the water and tried sitting on the toilet but again nothing changed. All this time I was so in the zone, I kept my eyes closed a lot that at one point when I opened them I was surprised that the sun had risen and how bright it was. I kept them closed after that as it was better to concentrate. More time passed and I got back in the pool, my midwife suggested feeling if I could feel the head. I could feel the membranes bulging out of me and was distressed by this. My midwife asked if she could look also and I consented, she and Robbie helped me out. This whole time Robbie had always been in my line of sight when I did open my eyes, he made sure I stayed hydrated and was always there. I learnt early on that I did not want him touching me or anyone touching me as it just irritated me when I was concentrating so hard! I used the breathing techniques and tried to roar my baby out but it wasn’t working for me.

After I had gotten out of the water again my midwife examined me. She stated what I had thought that my membranes were bulging. She asked if I would like her to rupture my membranes to see whether this would assist in getting baby here. By this point i think it was around 11am and I had been pushing since around 6am. I was so tired but understood what she was offering and consented to this. My midwife suggested that Robbie sit behind me and I lean against him which was great because I was so tired and having him physically support me made me feel so safe. She ruptured my membranes and I immediately felt my baby move down on the next surge. After this, I felt the need to bear down more so and did and then my baby was born! It was the most euphoric feeling I have ever experienced. I birthed my baby being supported by Robbie and I was so glad he could be apart of bringing our beautiful daughter into the world. We had delayed cord clamping all the while I had skin to skin with my little girl. This took about 20 minutes and we waited another 30 before my midwife suggested the needle (i can’t remember what it’s called) which I agreed to. I birthed my placenta and then had to be transferred up to KEMH as I had a 3a tear which had to be surgically repaired. This was the only shitty thing about my birth as it meant to had to get surgery and stay in hospital when Robbie and I had really been looking forward to going home 4 hours after birth.

I honestly credit hypnobirthing for having such an amazing birth and my wonderful midwife for being my rock. I have been recommending hypnobirthing now to everyone because as someone who has anxiety I was so scared of what was going to happen and the unknown, your course gave me so much knowledge and armed me with the right information to make informed choices and have the birth that was right for me. People still cannot believe that I had a natural birth as a first time mum and also that my girl was over 9 pounds with a 37cm head!