You are here: Home / Testimonials / And all I can say now is, you’ve got this. 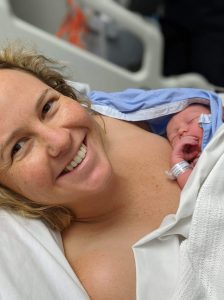 I did the weekend course in Torquay Victoria at 36wks pregnant and I wanted to share the email I sent to the group after I gave birth (I wrote it at 4am, after birthing at 10.30pm!). I’ve been sharing it because reading all the positive birth stories really helped me when I was pregnant and I can honestly say I had no fear of birth on the day (which I still can’t believe!).

In the 2 weeks leading up to the due date, I had some high blood pressure readings. This meant going from low-risk midwife clinic appoints to hospital observations every 2 days (one day we were in for 8hrs), booked date of induction, and therefore a lot of extra pressure to get this baby out.
This was a hard mental game, do we try get a few more days to try naturally but put bub and myself under potential risk?
I also found out I was Group B strep positive and was shattered this meant I couldn’t labour at home if my waters broke.

The induction date was tentatively booked for Wednesday 4th March at 3pm in the hopes I would give birth on my due date the next day, and although we could back out, we did 2 weeks of every natural labour tips:
• Walking every day
• Drinking raspberry leaf tea
• Bouncing on the fitness ball
• Expressing colostrum (fantastic practice for feeding and I can say was a God send in hospital)
• Chiropractor adjustment (highly recommend if you are stiff and sore)
• Massage with Clary sage
• Hubby spiking my food with chillies
• Acupuncture (amazingly relaxing)

On the weekend, I purchased the Baby Come Out hypno and Monday had acupuncture. I had a lot of last minutes fear building up and these help me to get my head calm and positive again. Monday my blood pressure was normal, so I was going to come in on the day of my induction, and negotiate if that it was still normal, I didn’t want to be induced. I called everyone to get them to get off my back, and stop sending me messages asking if baby has arrived (while lovely, became another overwhelming factor). Ah, peace at last…

…..on Tuesday 3rd, I woke at 4am with period-like cramps and asked my husband to get me a heat pack. I had a bath soon after, had on the relaxing music, and stronger cramps that ran up my back and down my thighs. My waters hadn’t broken and my mucous plug hadn’t shown up, so I kept thinking ‘ this can’t be labour..can it?’

I put my husband to work early with some massages, but didn’t like to be touches at all during surges. I also struggled to be standing or sitting on the ball as my surges actually ran down my legs so intensely that I had to lie on my side. But I distinctly remember looking into my husbands eyes and feeling absolutely no fear. I had a bit of a snooze around 10am and when I woke there was no mistaking I was in labour. I couldn’t flop with the back and leg pain surges, the TENS didn’t help me, and I started becoming vocal. So we started the surge timer and called our parents to be on standby.

Our parents dramatically turned up at the hospital at midday movie-style and were surprise that we were still home. I stayed at home until 6pm, having baths, using the heat pack, listening to hypnobirthing tracks on repeat… my husband’s mum is a midwife and was trying to make me walk around the house slowly (i later found out she didn’t think I was that far along). I was so incredibly happy that I was able to experience early labour with just my husband and my bed and the cat… and then it felt right to move to the hospital.

I walked into hospital at 7pm, felt ill and spewed shortly after, and the force of spewing actually released my mucous plug(!) so I had a quick shower. The midwives commented “we usually send ‘first-timers’ home, but lets check you” and I was 7cm dilated!! My waters were still a bit intact so they released them. Baby had done a poop so they were prepped in case he was distressed but I only focussed on myself. I had plenty of rest time between surges but as they were hurting my thighs the only place I felt comfortable was on my side lying down. I kept saying to my husband, I just want gas and then an epidural. Well… no time for that.. I had strong pressure on my bum to push and at 10:30pm baby was here!

I was very loud near the end and worried I nearly crushed my hubbys fingers but the midwifes couldn’t believe it and keep complementing me. I told them I was sorry for being loud, and they said that when they told me to ‘push’ I had really understood how to do that in the effective way so they were impressed.

I needed an episiotomy, and have a tear on my rectum.. maybe because he was quick to enter the world, I was feeling tense at that stage, his hand was up near his head or my positioning on my back, but really I didn’t care. I was in utter disbelief when he came out. I had done it! We had done it!

The midwives and students were incredible. They spoke to me at length about why I teared, the decisions they made about why they cut me (I had started to bleed even before he was crowning as i was still tight) and even said ‘I hope this doesn’t stop you from coming back to have more babies!’. Even though they didn’t get a chance to read my birth preferences (most of my labour items didn’t make it out of the bag) they asked before everything and we did immediate skin to skin, delayed cord clamping, hubby cut the cord, dim lights the entire time, and they all spoke really quietly. And I continue to use my calm breathing while I recover in hospital now.

And all I can say now is, you’ve got this.
Ingrid, Blake and Rufus