It’s been a while since we were in touch (I guess since July when we did our Hypnobirthing course with you!), but we just wanted to let you know that as of Saturday 19th December, we have a beautiful new addition to the Hypnobub family – our little daughter Aliya Lisa Cooper Deen.

Aliya was born in the RBWH Birth Centre (Brisbane) after a quick and slightly intense labour (6 hours from the first surge to when she emerged). My membranes had ruptured on the Friday night and after a trip to the hospital for the routine check, we came home expecting to sleep but instead I was greeted with surges in rapid succession starting around 1.30am. I have to admit being a bit taken aback by the intensity of them at first, and it took me a little while to get ‘in the zone’, but once I got in the shower and Riaz put on your Hypnobirthing tracks he said I visibly relaxed. 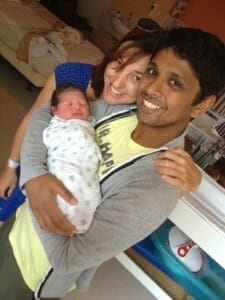 Indeed, throughout it all, the surges only felt painful when I wasn’t breathing and focusing on going with them, and as soon as I did so they were much more manageable and only intense but not unbearable.

By about 5.30am, with reassurance from our doula Cheryl (Ideal Birth), we were ready to head to the hospital. The 20 minute drive felt long but I was listening to ‘Surge of the Sea’ the whole way which helped enormously. We then had another hour of labouring in the Birth Centre when I was told, very happily, that I was fully dilated already! Both Riaz and I were at once extremely surprised and relieved to hear that! We promptly got in the bath and at 7.35am I gave birth to our beautiful Aliya in the water just as I’d been visualising. It was such a magical, amazing experience, made all the more so as neither Riaz nor I fully believed we could have it as we’d wanted it!

While we did everything we could to best prepare for a natural birth (we had a private midwife and doula since we only came back to Brisbane at 35 weeks, did acupuncture and went to the chiropractor in the month leading up to the birth, as well as listen to Hypnobirthing tracks since July) we were also thinking it could still go any way, especially as we passed the 40 week mark. Indeed we started to stress a bit as we reached that milestone and had to start thinking about possible induction options. At that point I had some calming acupuncture and also downloaded your new track (Baby, Come Out!) to encourage baby to come. That really helped a lot too to think I had other options than just going down the formal induction route. Luckily we didn’t have to get that far as my membranes ruptured on the night of my 41st week!

We can’t thank you enough for providing us with the knowledge and tools to have such a positive pregnancy and birth experience. While I may not have breathed perfectly or remembered exactly how to bear down during labour, the preparation I had most certainly kept myself and Riaz more calm and focused throughout and allowed me to have a smile on my face in the final stages in the water (I have photo evidence to prove that!(See photo at the bottom of this page)). 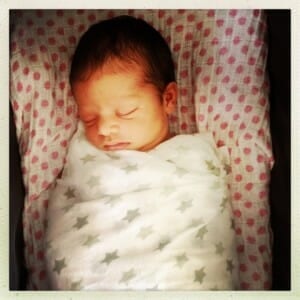 Doing your course early completely changed our perspective on what was possible in pregnancy and birth and made us investigate how we could maximise our chances of a natural birth. It also kept me calm and positive and focused on bonding with my growing baby rather than worrying about the labour. And last but not least it made a natural birth convert and advocate out of Riaz! Our first week of parenting has been a joy, in large part because we’re able to remain calm when Aliya cries or when we’re not sure what to do – I can’t prove it but could certainly credit our Hypnobirthing preparation in part for that too 🙂

In short, thank you for your belief in and promotion of positive birth experiences and for opening our eyes to them – we can now add to your library of stories!

This photo was taken just before the head came out. And then it was only another surge before our baby completely came out. Prior to the photo there were some strong surges and strong vocalisations, but when Nic managed

to get her breathing right, it helped her manage the situation.
Just before the final surge, Nic requested one of her favourite songs to be put on (a song by a Brisbane acoustic duo called Stringmansassy), and then she started singing along to it, and ‘sang’ our baby out to the world. Afterwards the midwives and our doula all said that they had never seen anything like it, and they all had a tear in their eyes to witness it. It was a truly beautiful birth experience for everyone.