Hi Melissa,
It’s only a year and a bit late but I just thought I’d let you know that our second hypnobaby, Alice, was born in August (2014). We are every bit as proud of her and her birthing story as we are of Alfie and his.

I had two guess dates for Alice. The original date was the 22nd
July but as the scan dates all returned as the 29th of July I managed to negotiate an extra week with my obstetrician after my 18 week scan. Can I just say that I am very happy that I had had that conversation with him early in my pregnancy as it bought me a valuable week and ensured I could birth Alice without being induced.

It felt like such a long wait for Alice. She started problem solving her birthing plan almost a month before she arrived. There were a number of occasions when my practice surges were that strong that I rang my mum and told her to be ready to come down to be with our two year old when we went to the hospital. Alice must have decided she wanted to get it right so started trying early!

My obstetrician understood the importance for us of birthing naturally and was happy on the 40 week mark to let me have another week without any examinations due to the success of Alfie’s birth. He said we would have to start making plan b and c if I made it to the next appointment in a week though. I booked in for another pre birth acupuncture session on the Saturday but we were still waiting for our baby to choose to arrive the next Tuesday. Matt came with me to the next obstetrician appointment so he could be involved in discussions and as predicted we were given until the Friday to start our birthing naturally. My acupuncturist fitted me in for another appointment that night and she said that there had been a huge shift in energy since the Saturday. She was sure we wouldn’t have to use our Friday induction appointment.

As I went to bed that night I tickled and talked to baby as I always did. This time I have to say that it was a much more persuasive conversation! “Right you in there. You need to choose come out tonight. We are running out of time for you to make the decision.” As I lay down to put my head on the pillow I felt what I thought was a different kick but the pop I felt was my waters breaking! It was a truly bizarre but exciting feeling given the conversation I had finished just seconds before. Once baby decided she was coming out she didn’t really waste any time.

I had a shower, told Matt, called my mum in Brisbane to let her know we had progress and then went back to bed. Within half an hour I realised that I was going to keep Matt awake so made a nest for myself on my two year olds play mat and got what rest I could. My surges went from 10 minutes apart to five minutes apart within an hour and by the time I woke up Matt to call the hospital and our neighbour To look after our son I was quite uncomfortable. I don’t remember my neighbour arriving as I had put myself in my hypnobirthing zone but I do remember telling Matt that I couldn’t get to the car even though it was at the front steps.

By the time We arrived at the hospital at 3am Matt had to wheelchair me up to the birthing suites. The midwives took one look at me and said there probably wouldn’t be time to fill the big birthing pool so filled the small one instead. By the time I had had my Mandatory monitoring I was more than ready to use the pool. My second stage of birthing was quite drawn out but not as long as it had been with Alfie. After an hour or so Matt convinced the midwives that I would be better in the larger birthing pool and they finally helped me make a dash for it in between surges. I remember sinking into the water and relaxing instantly. Within twenty minutes after that we had our little girl!

Unbeknownst to me her second stage of birthing was long because she was coming out posterior. Matt and the medical team could see her nose at one stage but Alice made the affirmation “my body and baby know what to do” true! Alice managed bring herself back up the birth canal and turn herself around. I think she was just giving my body time to stretch to her rather large head circumference before she came all the way out! 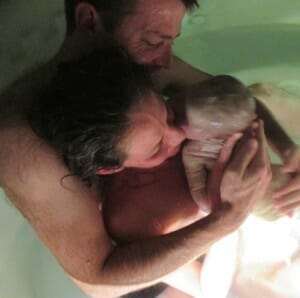 This time I remember the excitement of her head out and feeling her dance in the water before the surge that released her shoulders. It was beautiful!

When Alice appeared fully the obstetricians words were “that’s a big baby!” He and the midwives were trying to guess her weight and had it for about 4.2kg. When Alice was finally weighed after lots of skin to skin and my syntocinon drip had been given (I had to have it for 4hrs as I had a very large bleed) she weighed in at 4.7kg or 10lb 4oz!!!!! No one could believe how I fitted her in or got her out!!! I had been told by 2 obstetricians in the 3 weeks leading up to Alice’s birth that she would be small.

I had such a positive mindset prior to the arrival of our little lady and no fear. She is still a beautiful girl and is very interested in the world around her. Her big brother loves her to bits but a year on still has days when he would prefer to have his Mum all to himself!

Thanks again for the refresher course. I hope you are well. 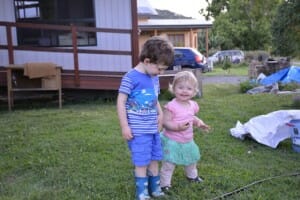