Just wanted to say mother HUGE thank you for our talk! After we discussed everything, it really helped me focus back on the task at hand.

The birth went EXCEPTIONALLY well. My obstetrician was flabbergasted. Even during the birth, he kept saying, “Geez, you’re so relaxed” and I’ve scanned in a pic of his card – it is quite telling, I think!

Instead of going with the compromise on the physiological 3rd stage, I 100% stuck to my guns and said that was what I wanted. He was hesitant of course, but accepted the decision. Also – the delayed cord clamping – it took 45 mins for the cord to stop pulsing! That is some serious nutrients that could have been missed, so I’m really pleased that I didn’t put a time frame on it, rather said to cut after pulsing ceased.

And to the little bundle – we had a baby girl – Abigail Clare. I was convinced she was going to be a boy, so it was the best surprise ever! She was 8lb14oz, and 56cms. And she is divine! So alert, and yet calm. I’m in love!

SO I can’t thank you enough Melissa, you were such a big player in how this turned out, so I am indebted to you 🙂 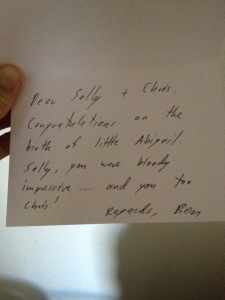