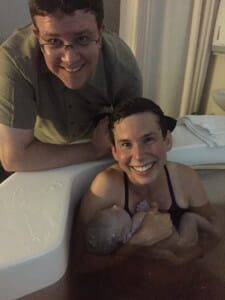 The birth of William, my second child, couldn’t have been more different than the birth of my first. Although that was two and a half years ago, I can still clearly remember the panic and the pain that set in very early on in labour. I got to hospital as fast as I could and got myself an epidural. However, when it was time to ‘push’, I couldn’t feel anything, so it was very difficult to push. After another two hours, my daughter was finally born, with assistance from forceps and an accompanying episiotomy. I was ecstatic at the time (it was still an amazing moment!) but I was shocked afterwards at how weak I felt, and how long it took for me to be easily mobile. I was determined that this second birth would be different – I wanted to do the pushing myself and be mobile afterwards. I remembered a friend in my mothers’ group recommending hypnobirthing (I’m forever grateful, Jenna!) and looked into it. It seemed to be just what I was after. So, at 28 weeks, my husband Graham and I did Melissa’s classes and we both came away both feeling excited about the upcoming event, my husband particularly so, as he finally had a clear role in the birth – no more watching and feeling helpless.

William was born on Thursday 7 May. I had an emotional meltdown (“what if I can’t do it!!!”) on the 5th, started cramping on the 6th, and on the 7th, I got up at 6am and realised my waters had broken. I still only had cramps at this stage so the morning was as normal. I eventually rang the hospital to let them know that my waters had broken and that I thought I’d be in later that day. They wanted to check me, so we unhurriedly made our way in. All was fine so I was welcome to go back home. And this is where the day got exciting!!! I happened to ask my obstetrician Dr Megan Castner if it was ok for me to hop in the bath when I got home, to which she responded, “Would you like a water birth?” This took me by surprise as I wasn’t aware it had been an option. But by taking part in a study, I could elect to have one. She gave me information to look at while I was at home, and the midwife said she would keep a bath free for me for later. By the time we got home at about 11am I had to stop and concentrate on breathing through my surges. I hopped in the shower then on the swiss ball and listened to the birthing prompts and the music. I managed just fine with rocking and the gentle massage – even doing the massage myself sometimes while Graham got things organised. I even read through the paperwork for the study, between surges. I was astounded how effective the massage was. I could barely feel a surge once the massage started.

After a while I began to feel, however, that they were fairly frequent (about 4 mins apart I found out later) and I wasn’t sure about being comfortable sitting in the car for very long, so we left home again about 1pm. I had two surges walking in to the assessment unit and then on the way to our room but I stopped and turned my face into my Graham and did the slow dance sway. My earphones were in all the time – the birthing prompts were the track of choice for me – the swell in the music was just like the rise and fall of my breath.

The same midwife that saw me in the morning led us quietly to our room which I noticed was already darkened. I hopped in the shower while they started the bath, and left Graham to do go through our preferences. After an examination, which was necessary for participation in the study, (I asked not be told the dilation, but later found out it was about 5cm), Megan told me to get in the bath and relax, put my ears in and get back into my zone. This was actually a bit tricky as I hadn’t prepared for a water birth at all, so as nice as it was to be supported in the water, I had to try a few positions before I found one that was comfortable. In the end it was an all fours position with my head on the edge of the bath. I just kept listening to the birth prompts and constantly directing my mental energy to concentrating on that. I was surprised how difficult I found that sometimes, even with all the practice I had done. I know I started being very vocal, breathing and mooing at the same time, and then it got to the point where I felt I couldn’t do it anymore, which I said out loud, and then my lovely midwife who I had hardly noticed up til this point, was right in front of my face, and I will never forget her encouragement and kind eyes as she said, so calmly and gently, “Yes, you can! You are nearly there!”

And then I started saying my affirmations out loud to myself – to drown out that little voice of doubt in my head – “I can do this. I am doing this”. And all of a sudden, this urge to ‘push’ took me completely by surprise – the power of it overtook me. I could feel everything opening up and it was just all happening before my eyes and it went past so quickly! I was very vocal. I could feel the pressure of his head as it stopped halfway out – and then it was out, and then I held my little baby as he came up and he was straight into my arms. It is a bit of a blur really! But afterwards, I felt so calm, and in awe.

William didn’t cry, he just looked calmly right back at me! It was a perfect birth and a real team effort with Graham, Megan and my midwife all on the same page. He was born two hours after we got to hospital, at 3.10pm. I had to have a prolonged, assisted third stage because of blood loss, but despite the procedures which followed, William was on my chest for the whole time and suckled happily for about an hour. I proudly declined the offer of a wheelchair to get up to my room, and walked my baby out myself. I did it!! I still cannot get over the difference in my two births – I would never have believed myself capable of a natural, unassisted birth. It was an absolute highlight in my life and I have no doubt I will be just as amazed by it, and just as proud of myself, when I am 80 years old!

I can’t thank you enough Melissa. We’ll be back for a refresher course when we are due with #3 – oh yes! I can’t wait to do it again. It was fantastic.