You are here: Home / Testimonials / The labour and birth were intense and beautiful, and the best experience of my life. 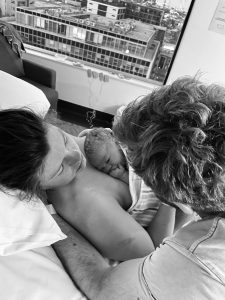 My bub arrived on 20 December at 40+3 gestation, following a beautiful 13 hour labour.

My waters broke at around 3 pm on 19 December while I was at a cafe.  I started feeling some period pain type feelings at that point.  My husband and I went into the hospital at around 5 pm and they confirmed my waters had broken and agreed we could go home and come back later once labour was more established.  On the way home we popped into a friend’s house, as she was hosting a Christmas dinner which I was supposed to be attending and I wanted to say hi to all the girls!  My surges were getting a lot more frequent at this point (around 3 minutes apart) but totally manageable, not really painful yet.  We left my friend’s house around 7:30, and ordered Chinese takeaway on the way home and talked about watching a movie while things started to ramp up (I thought that, being a first time mum, my labour would be really slow).  By the time we got home (15 minutes or so later) I knew that we would not be watching a movie or eating Chinese! The surges were already ramping up quite a bit.

As soon as we got home I changed into comfy clothes and got my husband to grab the TENS machine.  Within 30 minutes my surges were at the point that I was vocalising and having to count through them, leaning on my husband.  We called my sister who is a midwife to come over as our support person.  Not long after that I shifted from vocalising and leaning on my husband to being silent and needing my own space.  I used silent counting and breathing to get me though each surge.  I laboured at home until about 10:30 pm, between the shower and the floor of the lounge room.  At that point I think I was reaching transition because my surges were on top of each other, I vomited and felt really hot and cold. I was quite concerned the baby would be arriving imminently!   I didn’t think I would be able to get up off the floor to make it to hospital but was bullied into it by my sister and husband!

We drove to the hospital (worst 20 minutes of my life, as I wasn’t able to get in my zone).  Things really slowed down in the car ride and for the first hour or so at the hospital.  I was examined at about 1:30 am and asked them not to tell me how dilated I was (turns out later I was 5cm).  The OB said the baby was posterior which was slightly concerning, but I didn’t feel any back pain so I wasn’t sure what to make of this.  My sister got me up walking around and doing lunges to help the baby move into a good position.

Things ramped up fairly quickly after this and I felt the urge to push.  Baby seemed to have turned into the right position at some stage.  The pushing lasted around 2 hours, and I mostly did it in the bath where I would completely submerge my head and whole body every time I felt the urge to push! Everyone said later they found this quite funny..!  But it was so helpful, I could really focus on what I was doing during those moments underwater.  I was asked to get out of the bath for the actual birthing of bub, and the midwife and OB helped guide her out.  Bonnie was born at 4:39 am.  I ended up with a small first degree tear.  As a first time Mum with a 4.14 kg baby I was very pleased with that result!

During the labour I found that I couldn’t stand having music (even though I had spent ages making a playlist!) or any of the hypnobirth tracks playing, and didn’t love anyone talking to or touching me.  I was very much in my own head and just going with what my body was doing.  I had the lights off and had my eyes closed a lot.  I really found myself using my ‘reptilian brain’ most of the time as Melissa says during the course!  I was really in my own zone.  I used a lot of visualisation and positive affirmations (to myself, silently).  I found the TENS machine really helpful for the surges.  I also focussed on breathing, telling myself that my job was to give my uterus as much oxygen as possible so it could do its job properly.  During the pushing phase I focussed on relaxing my face and pushing my energy downwards and not internally.  I also told myself often that this was healthy, functional pain and my body was doing what it was designed to do.

The labour and birth were intense and beautiful, and the best experience of my life.  Such a challenge, but so rewarding and incredible.

Good luck to everyone preparing for their own births!