You are here: Home / Research, Statistics and Scientific Studies

Please find a list of research & scientific studies listed below, that look at the positive effects of using hypnosis and other techniques (used in the Hypnobirthing Australia™ course) on birth outcomes. 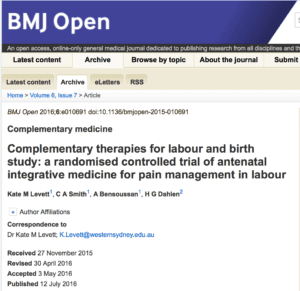 “Unexpected consequences: women’s experiences of a self-hypnosis intervention to help with pain relief during labour”,Finlayson , Downe, Hinder, Carr, Spiby, Whorwell. BMC Pregnancy Childbirth. 25 Sep 2015.  BACKGROUND: Self-hypnosis is becoming increasingly popular as a means of labour pain management. Previous studies have produced mixed results. There are very few data on women’s views and experiences of using hypnosis in this context. As part of a randomized controlled trial of self-hypnosis for intra-partum pain relief (the SHIP Trial) we conducted qualitative interviews with women randomized to the intervention arm to explore their views and experiences of using self-hypnosis during labour and birth.
METHODS: Participants were randomly selected from the intervention arm of the study, which consisted of two antenatal self-hypnosis training sessions and a supporting CD that women were encouraged to listen to daily from 32 weeks gestation until the birth of their baby. Those who consented were interviewed in their own homes 8-12 weeks after birth. Following transcription, the interviews were analysed iteratively and emerging conce 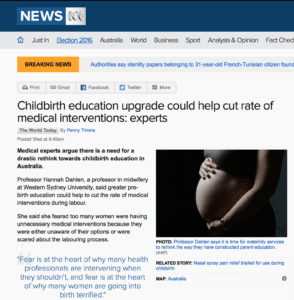 pts were discussed amongst the authors to generate organizing themes. These were then used to develop a principal organizing metaphor or global theme, in a process known as thematic networks analysis. RESULTS: Of the 343 women in the intervention group, 48 were invited to interview, and 16 were interviewed over a 12 month period from February 2012 to January 2013. Coding of the data and subsequent analysis revealed a global theme of ‘unexpected consequences’, supported by 5 organising themes, ‘calmness in a climate of fear’, ‘from sceptic to believer’, ‘finding my space’, ‘delays and disappointments’ and ‘personal preferences’. Most respondents reported positive experiences of self-hypnosis and highlighted feelings of calmness, confidence and empowerment. They found the intervention to be beneficial and used a range of novel strategies to personalize their self-hypnosis practice. Occasionally women reported feeling frustrated or disappointed when their relaxed state was misinterpreted by midwives on admission or when their labour and birth experiences did not match their expectations. CONCLUSION:laxation experienced by women using the technique needs to be recognized by providers if the intervention is to be implemented into the maternity service.The women in this study generally appreciated antenatal self-hypnosis training and found it to be beneficial during labour and birth. The state of focused re

“Hypnosis for pain relief in labour and childbirth: a systematic review”, Cyan, AM et al, Adelaide, Australia – British Journal of Anaesthesia, October 2004   BACKGROUND: In view of widespread claims of efficacy, we examined the evidence regarding the effects of hypnosis for pain relief during childbirth. METHODS: Medline, Embase, Pubmed, and the Cochrane library 2004.1 were searched for clinical trials where hypnosis during pregnancy and childbirth was compared with a non-hypnosis intervention, no treatment or placebo. Reference lists from retrieved papers and hypnotherapy texts were also examined. There were no language restrictions. Our primary outcome measures were labour analgesia requirements (no analgesia, opiate, or epidural use), and pain scores in labour. Suitable comparative studies were included for further assessment according to predefined criteria. Meta-analyses were performed of the included randomized controlled trials (RCTs), assessed as being of “good” or “adequate” quality by a predefined score. RESULTS: Five RCTs and 14 non-randomized comparisons (NRCs) studying 8395 women were identified where hypnosis was used for labour analgesia. Four RCTs including 224 patients examined the primary outcomes of interest. One RCT rated poor on quality assessment. Meta-analyses of the three remaining RCTs showed that, compared with controls, fewer parturients having hypnosis required analgesia, relative risk=0.51 (95% confidence interval 0.28, 0.95). Of the two included NRCs, one showed that women using hypnosis rated their labour pain less severe than controls (P<0.01). The other showed that hypnosis reduced opioid (meperidine) requirements (P<0.001), and increased the incidence of not requiring pharmacological analgesia in labour (P<0.001). CONCLUSION: The risk/benefit profile of hypnosis demonstrates a need for well-designed trials to confirm the effects of hypnosis in childbirth.

“Complementary and alternative therapies for pain management in labour”, Smith, CA et al, Adelaide, Australia – Cochrane Database of Systematic Reviews, October 2006.   BACKGROUND: Many women would like to avoid pharmacological or invasive methods of pain management in labour and this may contribute towards the popularity of complementary methods of pain management. This review examined currently available evidence supporting the use of alternative and complementary therapies for pain management in labour. OBJECTIVES: To examine the effects of complementary and alternative therapies for pain management in labour on maternal and perinatal morbidity. SEARCH STRATEGY: We searched the Cochrane Pregnancy and Childbirth Group’s Trials Register (February 2006), the Cochrane Central Register of Controlled Trials (The Cochrane Library 2006, Issue 1), MEDLINE (1966 to February 2006), EMBASE (1980 to February 2006) and CINAHL (1980 to February 2006). SELECTION CRITERIA: The inclusion criteria included published and unpublished randomised controlled trials comparing complementary and alternative therapies (but not biofeedback) with placebo, no treatment or pharmacological forms of pain management in labour. All women whether primiparous or multiparous, and in spontaneous or induced labour, in the first and second stage of labour were included. DATA COLLECTION AND ANALYSIS: Meta-analysis was performed using relative risks for dichotomous outcomes and mean differences for continuous outcomes. The outcome measures were maternal satisfaction, use of pharmacological pain relief and maternal and neonatal adverse outcomes. MAIN RESULTS: Fourteen trials were included in the review with data reporting on 1537 women using different modalities of pain management; 1448 women were included in the meta-analysis. Three trials involved acupuncture (n = 496), one audio-analgesia (n = 24), two trials acupressure (n = 172), one aromatherapy (n = 22), five trials hypnosis (n = 729), one trial of massage (n = 60), and relaxation (n = 34). The trials of acupuncture showed a decreased need for pain relief (relative risk (RR) 0.70, 95% confidence interval (CI) 0.49 to 1.00, two trials 288 women). Women taught self-hypnosis had decreased requirements for pharmacological analgesia (RR 0.53, 95% CI 0.36 to 0.79, five trials 749 women) including epidural analgesia (RR 0.30, 95% CI 0.22 to 0.40) and were more satisfied with their pain management in labour compared with controls (RR 2.33, 95% CI 1.15 to 4.71, one trial). No differences were seen for women receiving aromatherapy, or audio analgesia. AUTHORS’ CONCLUSIONS: Acupuncture and hypnosis may be beneficial for the management of pain during labour; however, the number of women studied has been small. Few other complementary therapies have been subjected to proper scientific study.

“The effect of hypnosis on pain relief during labour and childbirth in Iranian pregnant women”, Abbasi et all, Middlesex, UK – International Journal of Clinical and Experimental Hypnosis, April 2009   This study describes the effect of hypnosis on pain relief during labor and childbirth. Using a qualitative approach, 6 pregnant women were trained to use self-hypnosis for labor. Outcomes were analyzed using Colaizzi’s procedure.Women described their feelings about hypnosis during labor as: a sense of relief and consolation, self-confidence, satisfaction, lack of suffering labor pain, changing the feeling of pain into one of pressure, a decrease in fear of natural childbirth, lack of tiredness, and lack of anxiety. They expressed increased concentration on the uterus and cervical muscle, awareness of all the stages of labor, and having “positive thoughts.” Births were perceived as being very satisfactory compared to their previous experiences.

“Hypnosis for childbirth: a retrospective comparative analysis of outcomes in one obstetrician’s practice”, Vandevuss, J et al, Milwaukee, USA – American Journal of Clinical Hypnosis, October 2007   This exploratory, descriptive study, done retrospectively from perinatal medical records, compared childbirth outcomes in one obstetrician’s caseload between 50 women who elected antepartal hypnosis preparation (usually a 5-class series) and 51 who did not. The groups were demographically similar. To achieve similar numbers to the hypnosis group, the control group was randomly selected from the women in the caseload who opted not to take hypnosis preparation, based on characteristics of parity and delivery mode. Prenatal hypnosis preparation resulted in significantly less use of sedatives, analgesia, and regional anesthesia during labor and in higher 1-minute neonatal Apgar scores. Other physiologic and outcome measures did not reveal statistical significance, although some trends were of clinical interest. Well-controlled studies are warranted for clinicians to offer hypnosis more frequently as a pain relief option for childbirth. Additional information provided includes pragmatic, clinical, and cost information about incorporating hypnosis into a physician’s practice.

Six papers of special interest to the hypnosis community have recently appeared in the general scientific literatures. Three of these papers were published as part of the 2006 Cochrane Collaboration on the utility of medical interventions. These reviews analyze the research literature on the efficacy of hypnosis for treatment of needle-related pain in children, pain management during childbirth, and conversion disorder. Hypnosis is the most promising psychological intervention studied for needle-related procedural pain and distress in children and adolescents; it is effective as an adjunctive analgesic during childbirth; and it is of uncertain usefulness in treatment of conversion disorder. A second cluster of three studies unambiguously demonstrates the central role of hypnotizability as a predictor of responsiveness in laboratory, analogue treatment, and medical practice settings. One of these articles may well be the most important hypnosis paper in many years.

“Antenatal self-hypnosis for labour and childbirth: a pilot study”, Cyan, AM et al, Adelaide, Australia – Anaesthesia and Intensive Care, August 2006   In our institution we have used antenatal training in self-hypnosis for over three years as a tool to provide relaxation, anxiolysis and analgesia for women in labour. To assess the effects of hypnotherapy, we prospectively collected data related to the use of hypnosis in preparation for childbirth, and compared the birth outcomes of women experiencing antenatal hypnosis with parity and gestational age matched controls. METHODS: Prospective data about women taught self-hypnosis in preparation for childbirth were collected between August 2002 and August 2004. Birth outcome data of women using hypnosis were compared with routinely collected retrospective data from parity and gestational age matched women delivering after 37 weeks gestation during 2003. RESULTS: Seventy-seven antenatal women consecutively taught self-hypnosis in preparation for childbirth were compared with 3,249 parity and gestational age matched controls.Of the women taught antenatal self-hypnosis, nulliparous parturients used fewer epidurals: 36% (18/50) compared with 53% (765/1436) of controls (RR 0.68 [95%CI 0.47-0.98]); and required less augmentation: 18% (9/50) vs 36% (523/1436) (RR 0.48 [95%CI 0.27-0.90]). CONCLUSIONS: Our clinical findings are consistent with recent meta-analyses showing beneficial outcomes associated with the use of hypnosis in childbirth. Adequately powered, randomized trials are required to further elucidate the effects of hypnosis preparation for childbirth.

“Hypnosis to facilitate uncomplicated birth”, Mehl-Madrona LE, Tuscan USA – The Americal Journal of Clinical Hypnosis, April 2004   Prior research by the author showed that psychosocial factors distinguished complicated from uncomplicated birth outcome. The purpose of this study was to determine if prenatal hypnosis could facilitate uncomplicated birth. Following a psychosocial assessment, 520 pregnant women in their first or second trimester of pregnancy were randomized to receiving prenatal hypnosis or attention-only groups. The author provided all of the hypnosis in a manner similar to that taught by David Cheek. The goal was to reduce fear of birth and parenthood; to reduce anxiety; to reduce stress; to identify specific fears that might complicate the labor process (addressing them whenever possible); and to prepare women for the experience of labor. The attention-only group was matched to a no-contact comparison group. Women receiving prenatal hypnosis had significantly better outcomes than women who did not. Further assessment suggested that hypnosis worked by preventing negative emotional factors from leading to an complicated birth outcome. Attention only was associated with minimal differences in outcome over the no-contact group. The routine prenatal use of hypnosis could improve obstetric outcome.