It took us a little over two years to conceive Flynn and it was quite the journey. When conventional medicine did not work for us we decided to go down the natural health route and conceived Flynn within a matter of months of seeing a naturopath and acupuncturist. It made sense for us to also incorporate this natural method into the whole birthing experience and that’s what led us on the hypnobirthing journey. Having struggled with anxiety and depression in the past I knew I wanted to come into the labour without fear. I wanted to have a positive birth experience. 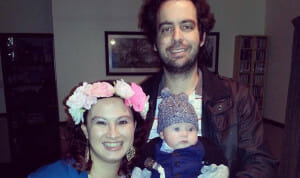 I signed up for the course when I was 20 weeks pregnant so I could have ample time to practice the techniques. I found the techniques helpful not just for practice surges but for anxiety in general. I played the affirmations and surge of the sea cd every day and really connected most with the stairwell script and the bubble of calm script. The light touch massage was also a great bonus! It helped my husband David to feel like he was a part of the whole process.

The day before Flynn was born I was having severe back pain. A friend was over and noticed that the back spasms were coming every 10 minutes. She mentioned that it seemed like I may be in labour but I dismissed it because I didn’t have any pain in my front or any other of the tell tale symptoms. After she left the back pain intensified. W
ith each surge I used my affirmations, went through the scripts and got David to use the light touch massage on me. I was in and out of the shower for relief. Eventually I lost the mucus plug and I initially felt relief followed by more intense pressure after. We called the hospital early the next morning as I was in a fair amount of discomfort. I could no longer sit or lie down. I had been standing for the last few hours. Hypnobirthing helped immensely despite the discomfort.

When I got to hospital just after 6:30 am, I was 2 cms and even though I said in my birth plan I wanted to return home if I was less than 4 cms in that moment I could not stomach the idea of going back home. Regardless, my obstetrician wanted to keep me in for monitoring.

I set up my aromatherapy diffuser and continued to play my affirmations. My birth plan did not go to plan with a number of interventions taking place but again I hypnobirthed through the entire process. By 5:00 pm I had progressed to 4 cms however, Flynn’s heart rate was getting faster and his head had an increasing amount of fluid surrounding it. The obstetrician suggested an emergency c-section for foetal distress. I asked for more time and they gave it. During that time I played the hypnobirthing track for a caesarean birth (I had downloaded it only the night before just in ca
se) to centre myself again. I was feeling a little sorry for myself because I really wanted to have a natural birth so playing this track helped me to get into the right frame of mind.

Flynn Elliott Braybrooke arrived at 7:40 pm on the 20th March 2015, 2 weeks before his due date. His head was elongated from having been stuck for so long. When he came out he gave one little cry and then was super calm. The assistants commented on how calm Flynn was and I believe this is because he was listening to the hypnosis tracks every day from 20 weeks onwards.

We continued to play the tracks during our stay at the hospital, with many staff commenting again on how chilled Flynn was. The Lactation Consultant in particular commented on how calm I was responding to her feedback when a lot of mothers are usually frazzled at this point.

There’s one particular funny moment when we got home where hypnosis was used. I heard my husband talking to Flynn in a slow, monotone voice. He kept repeating phrases such as ‘night time is for sleeping’ and ‘You are feeling very sleepy.’ I asked him what he was doing to which he responded ‘Can’t you tell? I’m using hypnosis to put our son to sleep.’

Thank you Melissa for all of your help and for your generous spirit. Even though the birth did not go to our initial plan it was definitely Flynn’s divine plan for his birth. His right path. We used hypnobirthing the whole way through (even using the healing from a caesarean birth track) and the benefits of hypnobirthing are still following us as we have a totally chilled out baby in Flynn. We are totally smitten.