You are here: Home / Testimonials / We both came away feeling so calm, confident and informed, excited even for the big day 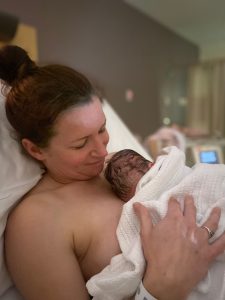 After struggling to conceive and having to go through IVF, my actual pregnancy was a breeze. I would go as far as to say I absolutely loved it, with only a few ‘off’ days in the first 15 weeks. At the start of the 2nd trimester I began doing a pregnancy yoga class and it was from this that I learned about Hypnobirthing and knew it was something I wanted to use for my labour and birth. I always came out of my yoga class so calm, and feeling connected to my body and baby. I figured that hypnobirthing was definitely worth a go. My husband, Matt, and I did a weekend course when I was 28 weeks pregnant and it was amazing how much we both got from it and how much more empowered we were. Matt confessed to being very sceptical about it all but we both came away feeling so calm, confident and informed, excited even for the big day. Throughout my 3rd trimester I listened to hypnobirthing tracks (often to help me nod off to sleep in bed), read affirmations, continued doing yoga and breathing exercises at home, walked a lot, wrote our birth plan and generally felt excitement as the day grew nearer. I shut out all the negative/difficult birth stories that so many people wanted to share with me.

Despite several doctors pushing for me to induced at 37 weeks (baby measured small) we held our ground, feeling empowered to continually question their reasons, and in the end they were happy to allow me to just wait and see. Our hypnobirthing course already paying off!

On 10th July, at 39w, 3days I started feeling mild stomach cramps around 6pm. It was a Saturday evening and I was at home with Matt watching the last Harry Potter movie. After an hour or so of feeling something I mentioned to him that I think this could be early labour. The cramps continued, very much like period cramps, mild and spread out. After a few hours I decided to put on the TENS machine to help me. We then watched Ash Barty win the Wimbledon final! It finished around 1am and we went to bed so Matt could sleep and for me rest whilst the surges were still mild.

Our bedroom was lovely and warm, and I lay down listening to a combination of Adele and the hypnobirthing tracks on my headphones. This helped so much and I think I did sleep a little, pushing the Tens button whenever I felt a surge. At around 5.30am I needed to get up, and used the birthing ball so I could move around, stretch and lean forward. It was at this point that Matt started tracking my surges, which were roughly 30-45 seconds long every 6mins. Matt called the hospital and the midwife told us to just keep doing what we were doing but did ask if I’d felt baby move. I’d been concentrating so much on my surges that, well, I hadn’t. This worried me a little but she just told us to pay attention to that for the next hour along with surges, and to call them back if we were concerned. An hour past and I still hadn’t felt baby move, although the surges had increased in frequency. Matt called the midwife back who said it’s probably best to come in then. At the same time, I went to the toilet and wiped some blood, which was very red. It wasn’t clotted like they say your ‘show’ will be, which worried us further. So this and not having felt the baby move for some time, we got ourselves together even quicker and headed to hospital. The drive was our quickest yet (Sunday morning is the time to do it!). I sat in the backseat, eye mask on. Matt played an affirmations track and, would you believe, I started feeling baby moving again! A very happy feeling.

We arrived at hospital around 8.30am, initially in the emergency department for blood pressure check and basic details, then taken up to another area so they could check baby’s heartbeat and monitor me a little. All was calm, surges still coming but I quietly breathed through. The midwife was happy that baby seemed fine and was saying that it’s probably best to just go back home until I start active labour, as clearly I was only in the very early stages. I was surprised by this as I felt I really was progressing and should remain at the hospital. At 10.30am she offered to check how dilated I was so we could then head home. After she checked she initially said “okay, do you want to know?” before quickly rephrasing to “actually I need to tell you as it impacts what we do now. You’re 4cm dilated so staying put! You’re clearly just a quiet achiever!” I knew it! So Matt and I stayed there in that transitional room for another 1-2 hours. I continued to use the TENS machine when I felt surges, and did a combination of walking around and sitting on the birthing ball. At around midday we were moved to an actual birthing suite. This involved moving to the labour ward which was a few minutes walk away and on a separate floor. I popped on my eye mask to stay in the ‘zone’ and held onto Matt and we walked slowly. I remember how quiet the ward felt and I’m sure people were looking at me funny!

The birthing suite was setup already as such a calm, dark and quiet space. Matt put on a playlist and I laboured there, mostly on my knees on the bed. At about 2pm it was beginning to feel like things had stalled and Matt suggested I go in the bath. The bath was huge so took ages to fill up, but goodness it was wonderful when I got in there. The water was beautifully warm, the room dimly lit and peaceful. Matt massaged my back and I had a nice bit of room to move around between surges. I remember Matt leaving to get a coffee and have a break, and the two midwifes stayed in the bathroom with me. His Spotify turned off as he left but they were so quick to setup theirs and played such chilled music. Most of the time I was quiet and kept my eyes closed, I barely knew they were there. After a couple of hours I think I started to get tired, and feel like things weren’t progressing much and decided I’d had enough of the bath. I got out, sat on the toilet for a few minutes (new position – anything worth a go!) then hopped back onto the bed, kneeling again. Matt was a great support, massaging my back and using pressure points in my shoulders to help at times as well as giving words of encouragement and small snacks! I remember asking the midwifes how much longer it’d be! I was still feeling okay and quietly breathing through them, but like things were taking a while. Would I give birth soon?! They reassured me that everything was still progressing and that I was doing amazingly.

It was at this point that we decided to have another check at how dilated I was. Ouch! (Honesty these checks were the most painful parts of labour), The midwife said I was 6cm dilated and that it was all going well but I did feel a little deflated that I wasn’t further along. Another hour or so passed and I began feeling the need to push. At this point however, my waters still hadn’t broken! We agreed for them to break them and from there things did feel different and I knew I must be getting closer.

Throughout the entire labour the midwifes had been monitoring baby’s heartbeat. It was from this point that they said I needed to work a bit quicker now to try get baby out as they were getting a little concerned it may now be in distress. They told me to really push in the surges now, like I needed to push out a poo, as the breathing down I was doing just wasn’t strong enough. Shortly after this two doctors came in and the atmosphere suddenly changed and everything sped up. They said that we had to get baby out quite quickly, that I needed to get on my back and put my legs up in stirrups so they could assist. I initially got upset, thinking I was failing and they were going to intervene after all my hours of work. The doctor told me I had to push harder than I ever had if I wanted to do this myself. This new pressure made me really go for it!! It was my body and I had the power to do this! Within a couple of minutes one of the doctors left (a very good sign that I was doing exactly what I needed to). The other doctor remained and quite directly told me I had to keep this up!! Boy did I find a new gear and push, grab a breath, push, grab a breath, push…..and then baby was out, and we heard it’s cries!! Wow. The final few pushes were the most intense of my life, but I did it!! Our little boy (Matt confirmed it!) was perfect!! Hamish was born on Sunday 11th July at 7.40pm weighing 2.8kg ❤️

I cannot recommend hypnobirthing highly enough. It made me feel calm, so empowered and my husband so involved and able to truely support me through the labour. Even in those final moments I knew I could do it.