You are here: Home / Testimonials / I truly believe because I was able to relax and remind myself that my body knows what it is doing is why my delivery was so smooth. 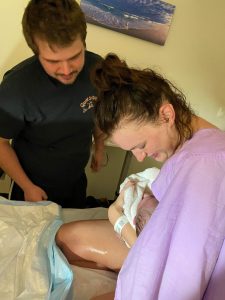 Just wanted to say thank you, thank you, THANK YOU for offering and running this program. I recommend it to all, even after the course if you simply take one small useful tool it installs so much confidence.

With my first birth little 6lb 10oz babe we had posterior 18 hour labour, it was a truly amazing birth I was able to remain calm but I found using the gas and air from the get go which was such a good form of pain relief from the get the go made me feel a little bit out of it and not in control of my own birth.

I then found hypnobirthing I had some fear around child birth again and got the odd comments “you’ve done it before it’s fine” & “it’s worse you know what to expect”. I was terrified. Then through Kalgoorlie Antenatal Clinic they gave me the program for the 4 day zoom class and I thought well there’s no harm in trying!

Due date rolls around and in my head im thinking nope baby will be late nothing but braxton hicks and discomfort is happening just typical end of pregnancy exhaustion.

40+1 I had an antenatal appointment booked in at 3:30pm I was tossing up trying a sweep or even an internal as it is truly no indication and there was no need to. At around 11am I was having little niggles but I thought could just be early labour and I couldn’t stop the pelvic pressure to go to the toilet. I went to the shops, come home had some lunch, relaxed, put on a tv show, stayed up right with some low dim lights, hung out with my daughter, had lavender throughout the house and as things picked up I put on my tracks & just my music. The tens machine was used just before we headed to my midwife appointment at 3:30pm.
I got to the appointment and the midwife wanted to check me as I was using the tens and had 3 contractions in less than 10 mins but I was able to talk through them.

We headed down to the maternity ward & I got checked. I was hesitant as I truly believed my cervix was effacing and getting ready to dilate and I didn’t want any doubt running through me. We did the internal and I was 6cms! So I had no choice but really to stay. My midwife was incredible immediately she set the room up with dim lighting, just her throughout and no traffic. Unfortunately in the stress of it all for my partner running around to come back he had forgotten a few tools grabbing my bags (affirmation cards, oils, lights).

I easily and comfortably relaxed and dilated to 8cms keeping the room happy, positive and full of love with the tracks playing and control over my breathing. Then transition hit the stage I was afraid of, my beautiful midwife was by my side as I rocked, mooed & vomited in the shower reassuring me this was exactly what my body was doing and we are close. I felt such a heavy urge to push during contractions and I knew I wasn’t yet dilated enough. I hopped out and on the bed again to re use the tens and quickly get checked as the urge over took me. At 8cms for distraction I tried the gas and immediately it just made me sick so back in the shower I hopped.

I never tracked time as I didn’t want my mind pressuring me, I assured myself there’s no set time on labour. I continued to progress in the shower, it’s true as the classes show many women tend to moan during the contractions my body took over and I moaned through each contraction except I was starting to involuntarily push, we checked again in the shower as I was still uneasy on if I was ready to. I never had the urge with my daughter I was coached. The midwife was more than happy for me to deliver in the shower, she checked and there was a lip of cervix at the front. So a few more contractions I hopped out to see if we could assist the bearing down was taking over me. I hopped on the bed upright leaning over with my partners hand, he popped on some music and with the first bearing down contraction the midwife was able to slip the cervix out of the way.

The bearing down was both incredible and tiring the doubt set in at this point so I got my partner to play the affirmation tracks. Next thing I knew I could feel a head, a few more contractions and they popped baby on the bed for me to grab as I was in shock of it all! ITS A BOY! Oh the feeling was euphoric and relief! We delayed the clamping and weighing and soaked up the golden hour, I delivered my placenta although had some blood loss so had medicine for this which unfortunately made me incredibly ill. This is the only issue we had! And it has cleared up! We have a healthy 8lb 5oz baby!

I truly believe because I was able to relax and remind myself that my body knows what it is doing is why my delivery was so smooth. Bubs heart rate never changed, he was calm because I was calm.